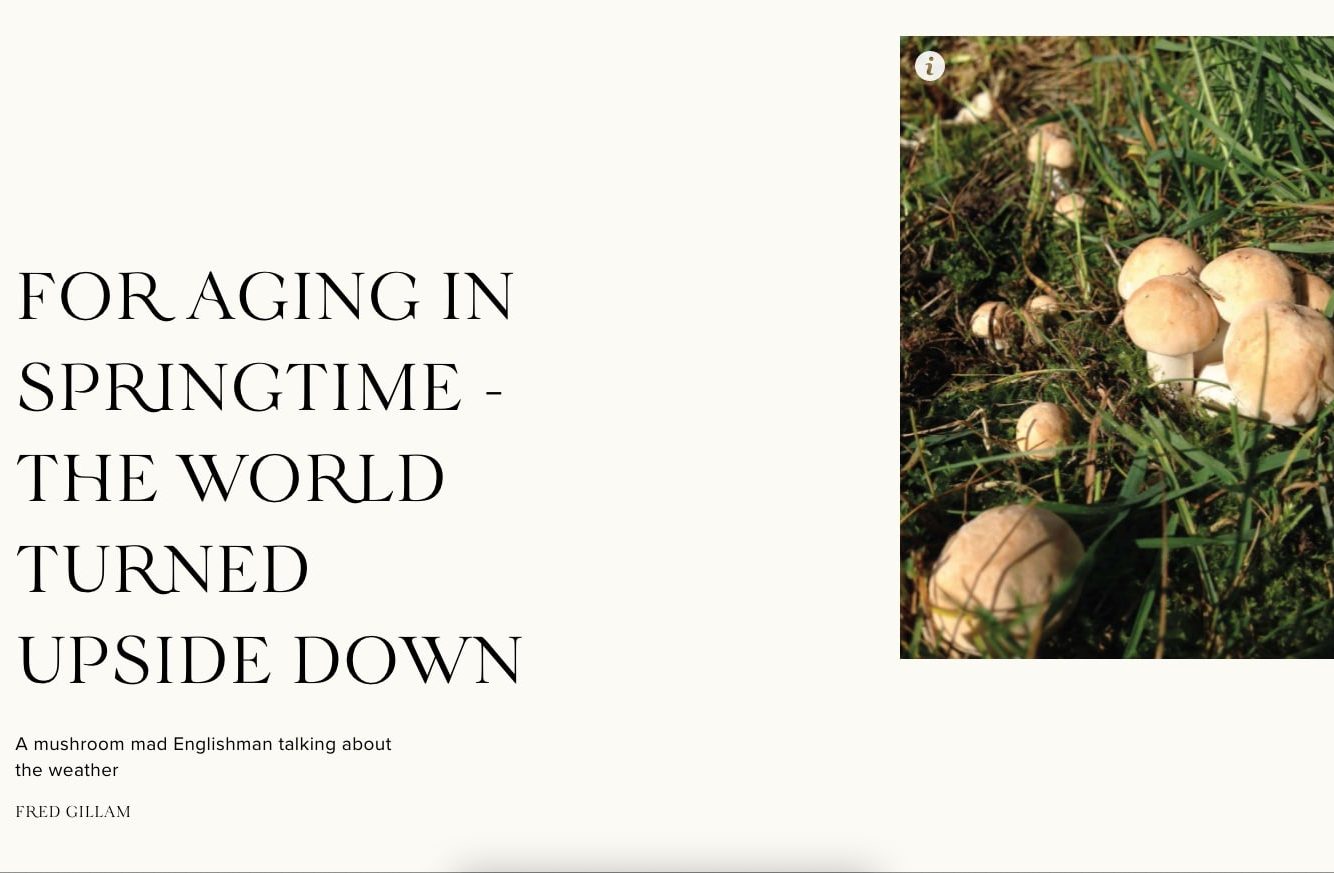 For Aging in Springtime – the World Turned Upside Down

As a lifelong forager, having started on this trajectory as a small boy in the fields and forests of Wiltshire in the South West of England where I grew up and foraged my way through almost 150 seasons, I stand to bear witness to what most of us have already realized: the climate, and with it the Earth herself, are changing.

On Christmas day two years ago I sat with George, my elderly father, who imparted to me my grandfather’s love of mushrooms, and as we talked at the table I noticed a circle of something white, gleaming in the grass outside. My brother and I went to investigate and returned with a hatful of prime field mushrooms, Agaricus campestris. My father’s jaw dropped. Understandable as he has spent the last few decades deriding me for going to search for them earlier than May.

But you see his perspective was founded on eight decades of working the land, working with horses, working with cattle, growing vegetables and vines. Increasingly the world looks unfamiliar to him.

This had also been the second shock so close to home; the large and overgrown cherry plum trees, Prunus cerasifera, just 30 yards from his house had been in flower on Christmas day the previous year. These are customarily in flower at the beginning of March, and accordingly there was very little in the way of fruit that year due to the lack of pollinating insects to be found on the wing in the middle of winter! To quote from the anonymous author, ‘T.J.’ from a Christmas 1646 broadsheet and ballad published by John Smith of London, the world is indeed being ‘turned upside down’.

“IN PERIODS WHERE SEASONAL ENVIRONMENTAL CHANGE HAPPENS COMPAR ATIVELY SLOWLY, PEOPLE LEARN TO HANG THEIR HATS UPON THE SEASONS”

In periods where seasonal environmental change happens comparatively slowly, people learn to hang their hats upon the seasons. In the part of the world where I grew up, May Day and the spring ‘Whitsun’ festivities in the village coincided with the flowering of the whitethorn or hawthorn tree. Earlier still, the time of candlemass at the beginning of February was associated with the appearance of flowering snowdrops, and for a long time it was as if you could set your clock by these plants; so much so that people today can be heard swearing that the calendar itself must be wrong when the hedgerows, alight with the bridal confetti of hawthorn blossom, put on their display two weeks ‘early’.

As discombobulating as the shifting almanac of the anthropocene is, as winter gives way to springtime here, we still notice the wave of new species that begin fruiting, triggered by the slight but sustained increase in nighttime temperatures. Following them, we leave hunting for the more frost loving winter species such as velvet shank Flammulina velutipes, field blewit Lepista personata and olive oysterling Sarcomyxa serotina behind.

Scarlet elf cup Sarcoscypha coccinea begins the year’s cycle of fungal bloom. Their incredible intensity of colour, frequently highlighted by a contrasting verdant green backdrop of damp moss, brings a sense of delight, an excitement of what is to come and a sense of reassurance that the seasonal cycle is about to begin again; that the order of the wild around which we have arranged our lives still exists, at least up to a point, at least for the time being. Yet there is no doubt that it is changing, and fast. Scarlet elf cup, arriving earlier and earlier, also now finds itself deployed in some of the top London restaurants, where its bright colour lends itself to decorative canape cases on foraged plates. It has to be said that there is no known long-term history of eating this mushroom so it should probably be consumed in moderation.It also has surprisingly little flavour, but truly is very decorative!

Soon after the scarlet elf cup appears it is generally worth looking for the first morels. Morels are not so plentiful here in the UK it seems as in some countries. On the internet I have seen images of people with wheelbarrows full of morels at morel festivals in the US and elsewhere. That would be extremely unusual here, but the diligent forager can still harvest them by the hatful, in return for a sustained walking effort, turning over the leaves of dog’s mercury Mercurialis perennis, in ash-maple woodland.

“SCARLET ELF CUP, ARRIVING EARLIER AND EARLIER, ALSO NOW FINDS ITSELF DEPLOYED IN SOME OF THE TOP LONDON RESTAUR ANTS”

The common morel Morchella vulgaris and the yellow morel Morchella esculenta are always worth the hunt. It pays to seek it where speedwell accompanies dog’s mercury in the ground layer of these woods (there are a few other associated plants known to the initiated few) though unless you are very lucky you will be disappointed and return home empty handed many times before you find your reward. They must be cut in half to remove any small beasties that may be living inside of them, thoroughly rinsed before dabbing them dry and cooking them ideally in butter. Freshly harvested morels have a wonderful texture, though the flavour is intensified if they are dried first, after which they should be marinated in warm salty water seasoned with herbs and pepper before use. Be sure that they are hollow all the way through cap and stem, to distinguish them from the false morel, Gyromitra esculenta.

As the ancient ash-maple woodlands slowly disappear under property development and agriculture in the UK, many foragers have turned to a different species of morel that also appears after the first few warm nights in the spring. The European Morchella importuna (formerly elata), the black morel, is a saprophyte on fallen conifer bark debris. Very similar species can be found in North America. As new housing estates, trading estates, and municipal plantings appear in profusion throughout the land, these can be found in good numbers emerging from bark chip mulch that has been laid under flower beds and shrub planting over the previous twelve months. These urbanites are every bit as delicious as their ancient woodland cousins and these days seem to be a lot easier for most of us to find! If you do have a population of them growing on your own property they are likely to have arrived in imported conifer bark chip, and you can keep the mycelium running for next year by simply topping up the bark chip each year to make sure they do not run out of nutrients.

“CALOCYBE GAMBOSA ARE KNOWN AS MARZOLINO IN ITALY AND IN FR ANCE SIMPLY AS MOUSSERON – THE OLD FRENCH WORD FROM WHENCE WE DERIVE THE ENGLISH WORD MUSHROOM.”

As a child we would forage in Spring for prized ‘field mushrooms’ on pastureland and in the furrows of plough-soil that had not been given the now customary dose of chemical fertilisers, herbicides or worst, fungicides. Though today these mushrooms have somewhat retreated from pasture in Southern England (perhaps as a consequence of all that dosing), they are still a common find on commons, on the high chalk downland, and in moorland pasture elsewhere. They may also be found on the scruffier kinds of golf courses, on playing fields, and of course in gardens with less manicured lawns, though they do not seem to occur in the huge numbers that we still used to find 30 or 40 years ago. Field mushrooms are delicious fried in the traditional way, which in England involves beef dripping or lard, and served with eggs and bacon on doorstops of buttered crusty bread.

“POLITICIANS ARE ILL PLACED TO MAKE RULES ABOUT THINGS THAT ARE WILD, SOMETHING THAT BARELY TOUCHES THEIR WORLD AND TO WHICH THE SUBJECT OF THEIR LIVES BEARS LITTLE TO NO RELATIONSHIP”

Perhaps the king of all the spring mushrooms, at least in the chalk downland and limestone counties of southern England, is the St. George’s Mushroom, Calocybe gambosa. These are known as Marzolino in Italy (the reference here being to the month of March), in France simply as Mousseron (the Old French word from whence we derive the English word mushroom) and they also occur in many other locations in the world, including North America and Japan. Formerly placed in the genus Tricholoma, these mushrooms are creamy in appearance, meaty, thick fleshed and enjoyed by many. One of my favourite dishes consists of a warm salad of sauteed St. George’s with the young spring growth of chickweed, Stellaria media, and dandelion, Taraxacum officinale, served with strips of bacon and a few lightly sizzled dandelion flowers; the whole being dressed with an elderberry vinegar and tamari dressing. I write this having just enjoyed my first dish of the year, seven weeks early, as traditionally they fruit around St. George’s day on the 23rd of April. They never fail to surprise me every year!

The profundity of the turning of the seasons of the earth in the temperate climate of the northern hemisphere is, despite (or perhaps especially due to) the topsy-turvy times, best experienced raw and direct; through the body, with the emotions, described in terms of poetry, modelled by good science, and understood as part of the path to wisdom. ‘Politics’ really do not concern me, as even the derivation of the word in the ancient Greek from politēs, ‘citizen’, and from polis, ‘city’, speaks to me of the way in which an urban society is ordered, far detached from the rules of wildness that bring a chaotic ‘rule’ to the life of the forager. Indeed, politicians are ill placed to make rules about things that are wild, something that barely touches their world and to which the subject of their lives bears little to no relationship.

Large scale intervention is going to be needed, but it must be driven and directed by the intimate, profound, wisdom of engaging with the wildness of the world and the weather. 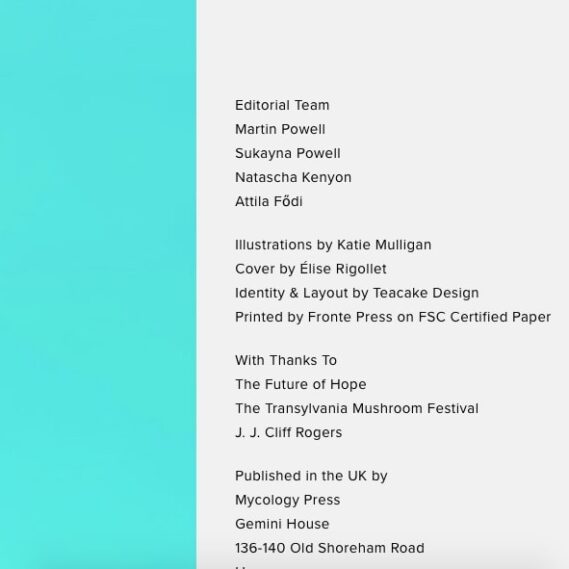