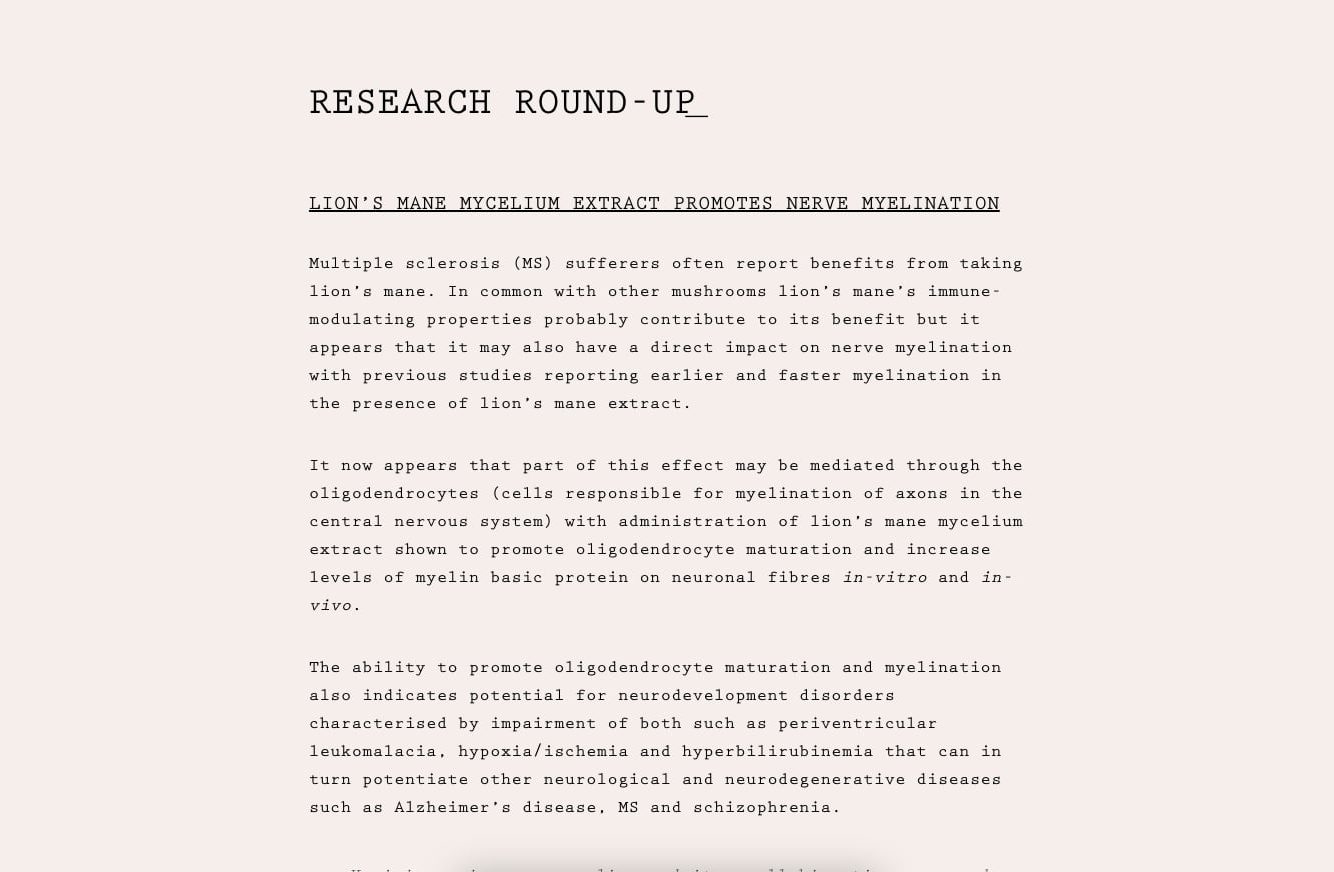 Multiple sclerosis (MS) sufferers often report benefits from taking lion’s mane. In common with other mushrooms lion’s mane’s immune-modulating properties probably contribute to its benefit but it appears that it may also have a direct impact on nerve myelination with previous studies reporting earlier and faster myelination in the presence of lion’s mane extract.

It now appears that part of this effect may be mediated through the oligodendrocytes (cells responsible for myelination of axons in the central nervous system) with administration of lion’s mane mycelium extract shown to promote oligodendrocyte maturation and increase levels of myelin basic protein on neuronal fibres in-vitro and in-vivo.

The ability to promote oligodendrocyte maturation and myelination also indicates potential for neurodevelopment disorders characterised by impairment of both such as periventricular leukomalacia, hypoxia/ischemia and hyperbilirubinemia that can in turn potentiate other neurological and neurodegenerative diseases such as Alzheimer’s disease, MS and schizophrenia.

In last issue’s research round-up we reported on a study showing correlation between higher mushroom consumption and reduced prostate cancer risk which follows a number of similar studies showing reductions in breast cancer risk and in general cancer risk.

In this paper 17 observational studies with a 95% confidence interval (CI) and at least two levels of mushroom intake were subject to meta-analysis with the highest level of mushroom consumption in the population groups studied associated with a 34% reduction in risk of breast cancer and a 20% reduction in the risk of other cancers when compared to the lowest consumption group.

Given the reproducibility of similar findings across multiple studies it would appear that dietary consumption of mushrooms does indeed have a protective effect against cancer with the greatest reduction associated with the highest level of consumption, typically define as 3-4 times a week.

Today there is increasing use of spent mushroom substrate (SMS) as a remediation agent in the passive treatment of heavy metal contamination with various mechanisms identified including the complexation of heavy metals and formation of insoluble salts.

Using SMS to treat cadmium (Cd) contaminated rice paddy the best results were obtained using a combination of SMS from common button mushroom cultivation (Agaricus bisporus) and King Oyster Mushroom (Pleurotus eryngii) with significant reductions in Cd availability in the soil and Cd concentration in the rice plants and a 32.9-38.8% increase in rice production.

In a second recent study the SMS microbial community was shown to also convert arsenic (As) from soluble to insoluble forms and also to trap As ions.

Mushroom extracts are increasingly finding their way into cosmetics because of the anti-inflammatory, circulatory and moisture-retentive properties of their triterpenes and polysaccharides. In addition, a range of other skin-protecting factors have now been identified, including indole derivatives, sterols, phenolic acids and, in the extracts of Laetiporus sulphureus and Ganoderma applanatum, Kojic acid.

It was observed that L. sulphureus extract caused dose-dependent inhibition of hyaluronidases (enzymes that break down hyaluronic acid), while all the extracts inhibited tyrosinase, an enzyme involved in skin pigmentation.

G. applanatum extract was shown to offer the greatest sun protection with an SPF of ~9.

Hypercholesterolemia has been implicated as a contributory factor in the development of Alzheimer’s disease (AD), the most common neurodegenerative disorder affecting memory and learning abilities.

In two recent in-vivo studies positive effects were seen from polysaccharide-based extracts of shiitake in one and reishi in the other with their prebiotic effects identified as having a beneficial impact through the colon-brain axis.

In the second reishi hot-water extract was shown to alleviate spatial learning and memory deficits both in rats fed a high cholesterol diet and in Alzheimer’s disease model rats.

After harvesting of the fruiting bodies, the remaining spent myceliated substrate represents a potentially valuable nutritional supplement in its own right, containing mushroom mycelium and residual substrate as well as compounds secreted into the substrate by the growing mycelium.

In this study 120 weaned pigs were randomly divided into five treatment groups: positive control given the antibiotic colistin and four negative control groups with respectively: 0, 0.5, 1.0 and 1.5 g/kg of spent C. militaris substrate (CM).

With increasing concern about the routine use of antibiotics in animal feed it appears that this approach may be considered as an alternative to reduce antibiotic use in the diet of weaning pigs and possibly other animals.

DEVELOPMENTS IN THE CONCEPT OF THE FUNGAL MIND: HYPHAL AND MYCELIAL CONSCIOUSNESS

Like other cells, fungal hyphae show exquisite sensitivity to their environment. This reactiveness is demonstrated at many levels, from changes in the form of the hypha resulting from alterations in patterns of exocytosis, to membrane excitation, and mechanisms of wound repair. Growing hyphae detect ridges on surfaces and respond to restrictions in their physical space and fungal mycelia also show decision-making and alter their developmental patterns in response to interactions with other organisms.

Remarkably mycelia also appear capable of short-term memory, responding more rapidly to severe heat shock the second time it is administered than the first and may even be capable of spatial recognition with a mycelium growing within a wood block memorizing the relative position of a second wood block (food source) after the original wood block is removed and placed in a fresh soil tray.

Given the wealth of research revealing the sensitivity and responsiveness of individual hyphae to their environment, coupled with the novel studies on mycelial learning and memory, the author suggests that now is a fruitful time to recognise fungal ethology as a distinctive discipline.

MATSUTAKE AS A FUNCTIONAL FOOD INGREDIENT WITH ANTIFATIGUE EFFECT

A number of mushrooms have been shown to have anti-fatigue effects, notably Cordyceps species (Ophiocordyceps sinensis and Cordyceps militaris) but also many others including: lion’s mane, snow fungus, reishi, chaga, antrodia and shiitake through their beneficial impact on muscles, cardiovascular, immune and hormone systems, as well as enhanced antioxidant capacity.

In previous studies peptides from matsutake (Tricholoma matsutake), a popular culinary mushroom especially in Japan, have been identified as having anti-fatigue effects through improved cardiovascular fu nction and enhanced free-radical scavenging activity and in a recent study mice fed cookies containing matsutake for 30 days showed significantly prolonged swimming time to exhaustion with increases in the levels of muscle and liver glycogen, accompanied by reductions in serum levels of lactic acid and urea nitrogen.

In addition, the matsutake cookies dramatically increased the activity of superoxide dismutase and glutathione peroxidase in the serum as well as decreasing the level of malondialdehyde (a marker for oxidative stress) confirming matsutake’s ability to increase antioxidant capacity.

FUNGI ARE MORE WIDESPREAD THAN MANY IMAGINE

In addition to the well-documented mycorrhizal associations between plants and fungi that occur in over 80% of plant species we are now starting to realise that fungi are not only found in association with the roots of plants but occur throughout all plants, including in the seeds.

In a recent study at Kew Gardens, UK almost 200 fungal species were isolated from the seeds of just 6 plant species with the fungal endophytes present in each set of seeds examined and varying according to where the seeds were collected from.

At the same time another recent paper highlighted the ability of fungi to survive in diverse environments with marine fungi found living in several Antarctic macroalgae and 48 fungal isolates obtained from six species of macroalgae.

How we discovered a hidden world of fungi inside the world’s biggest seed bank. Rowena Hill. The Conversation, March 22, 2021.

While some animals such as beavers and insects such as termites have long been known to actively regulate their surroundings to produce an environment conducive to their survival and proliferation it now appears that mushrooms do the same.

At one time or another we have probably all observed the lushness of the grass at the perimeter of fairy rings. It has now been shown that Mushrooms such as Lepista sordida which form fairy rings are actively producing chemicals that promote the growth of the grass with these compounds proposed as a new class of plant growth hormones.

By producing chemicals that promote plant growth the mushrooms generate increased levels of chlorophyl, photosynthesis and the organic compounds thus generated with the assumption that the mushrooms are then able to benefit from these through increased transfer via mycorrhizal associations.

Buildings account for around 40% of worldwide energy consumption and nearly a quarter of global greenhouse gas emissions with efforts to increase their energy efficiency playing a key role in meeting energy and climate targets.

As a traditional building material it has long been known that electricity is generated by the compression of wood through the piezoelectric effect induced by the displacement of crystalline cellulose in response to mechanical stress. Practical application has been prevented though by wood’s limited deformability and the tiny amounts of electricity thus produced.

It now appears that mushroom mycelium may be part of the answer to resolving this conundrum.

By using mushroom mycelium (in this case Ganoderma applanatum) to partially remove lignin and hemicellulose from balsa wood researchers were able to produce biologically-modified wood with a 55-fold increase in the energy generated when compressed (15x15x13.2 mm of decayed wood produced a maximum voltage of 0.87 V and a current of 13.3 nA under 45-kPa stress).

FUNGAL SKIN IS ABLE TO FEEL

Drawing on previous experience designing tactile colour sensors from slime mould (Protists previously classified as part of the fungal kingdom) and earlier research into the use of mushroom-derived skin substitutes for wound healing a group of researchers developed a thin layer of Ganoderma resinaceum mycelium as a living skin with the ability to self-repair and grow.

They further showed that the skin had the ability to respond to mechanical and optical stimulation with changes in patterns of electrical activity, reacting differently to loading of a weight, removal of the weight, and switching illumination on and off.

From Cordyceps to a New Counter Culture
We use cookies on our website to give you the most relevant experience by remembering your preferences and repeat visits. By clicking “Accept All”, you consent to the use of ALL the cookies. However, you may visit "Cookie Settings" to provide a controlled consent.
Cookie SettingsAccept All