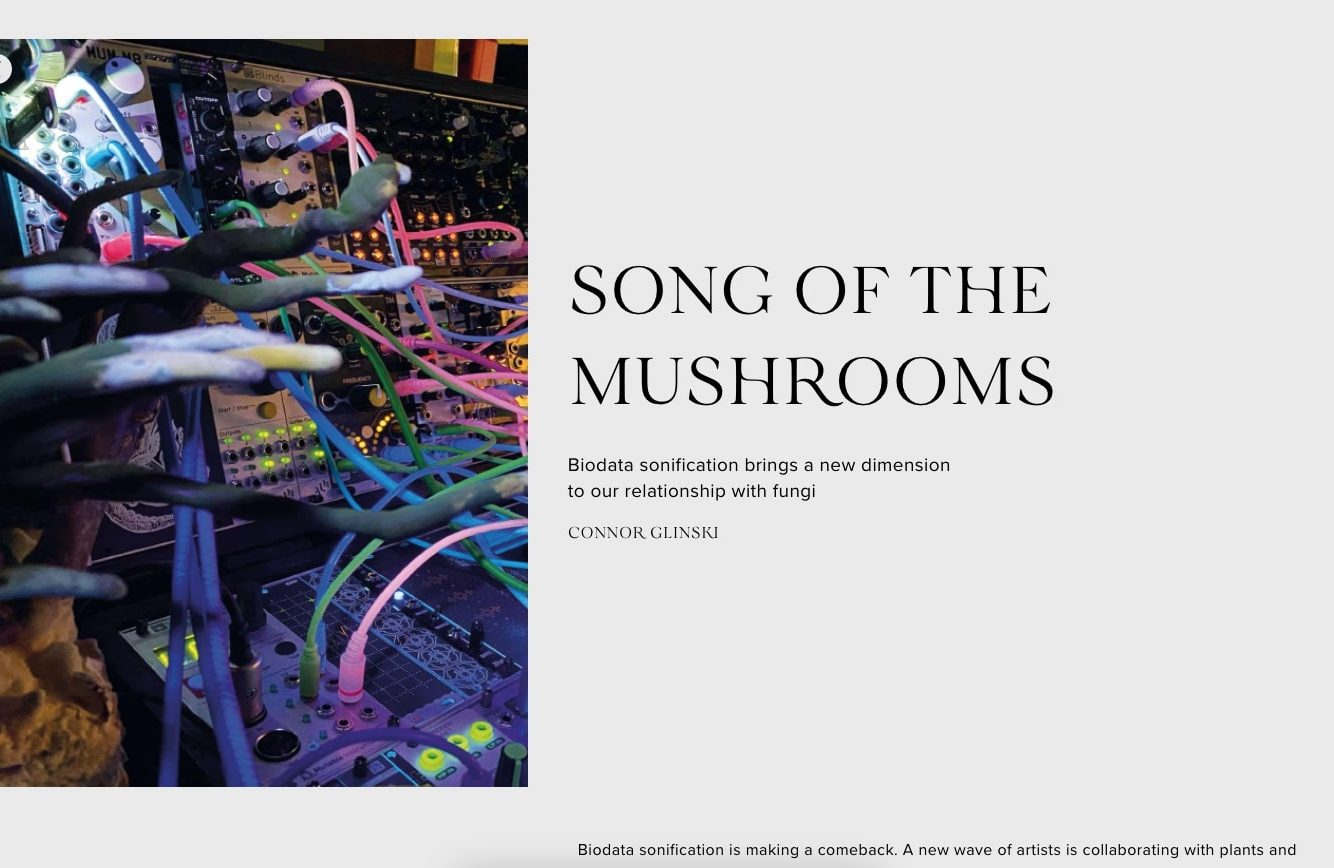 Song of the Mushrooms

Biodata sonification is making a comeback. A new wave of artists is collaborating with plants and fungi to create vibrant experimental electronic soundscapes, and going viral in the process. In November 2020, experimental musician Mycolyco’s “Five Minutes of Pink Oyster Mushroom Playing Modular Synthesizer” went viral on Youtube and Instagram, capturing the attention of the scrolling masses, and reaching over four million views. In the video, the pink oyster mushrooms are connected to a modular synthesizer, seemingly communicating with each other through a series of harmonic bleeps. Also in 2020, Michael Allen Prime collaborated with Merlin and Cosmo Sheldrake to make a song out of the sound of oyster mushrooms eating a copy of Entangled Life. Mycelium music has gone mainstream.

The curious process involved in translating the song of the mushrooms can be traced to the experiments of an eco commune/cult founded in the foothills of the Italian Alps in the 1970s. Influenced by Peter Tompkins and Christopher Bird’s ecologically spiritual but scientifically disputed The Secret Life of Plants (later turned into a curious time lapse film with a soundtrack by Stevie Wonder) The Federation of Damanhur sought to prove that plants had emotions. They began experimenting with attaching a polygraph to plants to translate their ‘biodata’ into sound. The electrodes of the polygraph had found a new purpose, from the interrogation cell to the commune; to translate a musical voice from the electronic micro-impulses of plants.

The cult’s polygraph experiments were crude, but they were also ahead of their time. The possibilities of human/botanical collaboration are now becoming far more accessible, with modern digital audio workstations such as Ableton allowing fo the easier integration of increasingly advanced sonification technology (such as the MIDI SPROUT) with conventional music making and mixing equipment. The system, however, remains pretty similar to a simple lie-detector.

Biodata sonification works by using two sensitive electrodes on the surface of a plant or mushroom to measure small changes in electrical conductivity. The electrodes have to be isolated so you can get the ‘natural’ sound of the organism’s electrical shimmys. These changes are detected by a microcontroller using standard deviation calculations and averages, and can be fed into a program to turn on LED lights or produce MIDI notes (MIDI is a language for computers to talk to and control synthesizers and other electronic sound making machines). This produces a relatively dense stream of sound data, but the raw files can be modified with any number of programming and technological interventions.

The soundscapes and tunes that can be created from the raw data by almost anyone with simple sound-processing software are unpredictable and rich. Because the sounds are of the mushroom just going about its daily life, the resulting notes aren’t ‘on the beat’. Depending on how the human collaborator has programmed their tech, and how they approach the data in post-production the results can sound like an electric lullaby or like the most experimental modular synth work of pioneers like the BBC’s Delia Derbyshire. Many artists and musicians work with biodata sonification to bring extra dimensions and extra-human collaborators into their work, often with an outlook as sci-fi-spiritual as that of the cult who first pioneered the technology.

So what does mushroom music have to offer? Multidisciplinary artist Tosca Terán collaborates with fungi and living mycelium frequently in her work. She explains that not all fungi are the same’: “I’ve certainly ‘listened’ to many different fungi. Out in the wilds of Iceland, and in and around Wollemi park Australia and around Canada, as well as from specifically cultivated species – so far I would have to say that Ganoderma lucidum produces the most ‘musical’ if you will, melodic sounds. While Pleurotus ostreatus produces constant activity. I found Physarym polycephalum (myxomycetes) to be more of a tone cluster.” This variety, along with the immediacy and unpredictability of water with a living but non-verbal collaborator, is enriching.

“GANODERMA LUCIDUM PRODUCES THE MOST ‘MUSICAL’ IF YOU WILL, MELODIC SOUNDS. WHILE PLEUROTUS OSTREATUS PRODUCES CONSTANT ACTIVITY”

Tosca has been interested in mushrooms and music all her life, and started playing with touch sensors as part of her work in around 2008. This led her to biodata sonification, via research into the Slime Mould music Paloma Lopez and Leslie Garcia were creating with the EnergyBending Lab and the Phytracker. She started building her own capacitive sound sensors and eventually developed her current immersive multimedia practice in partnership with her mycelial collaborators.

She is currently working on several projects, including Sym/Dys: a fully immersive, mixed reality experience working with living mycelium biodata-sonification within a VR environment, with collaborator Sara Lisa Vogl. Another (also with Vogl)called MyceliOhms for A MAZE Berlin, where visitors will be able to “visit the virtual mycelium organism (living mycelium in the real world) and interact with it. I will be collaborating live in real-time with the mycelium generating music/sounds (mycorave!) while Sara Lisa and other dancers perform in the virtual air.” A third is for New Adventures in Sound Art and is called Mycorrhizal Rhythm Machine. “Mycorrhizal fungi will bio-sonify over several months, as plants grow and analogue instruments will be triggered – I am building instruments out of wood, glass, metal for the mycorrhizal fungi to ‘play’.”

For Tosca, the technology opens up new ways of embracing the world “since I’ve been working with nonhuman organisms I’ve found myself growing more protective of how humans treat the shared environment, I am very protective of the organisms I cultivate and how they’re handled in my installations. I definitely believe nonhumans are conscious, in different ways than humans.” Tosca’s work, along with the viral and streamable pieces by Mycolyco, and all the other work incorporating fungal sonification, promises to be a fruitful avenue of exploration and communication, capturing the imagination of many with its sonic, sci-fi, and spiritual dimensions. With calls for studies into mycelial consciousness growing, mushroom music may help give more people a way into the big questions about life, consciousness, art and our place in the universe. Hopefully without anyone along the way feeling the need to form a cult. 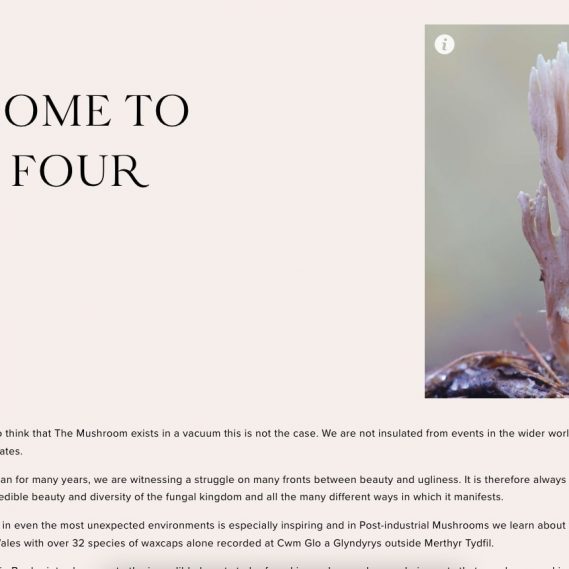 Welcome to Issue Four
We use cookies on our website to give you the most relevant experience by remembering your preferences and repeat visits. By clicking “Accept All”, you consent to the use of ALL the cookies. However, you may visit "Cookie Settings" to provide a controlled consent.
Cookie SettingsAccept All