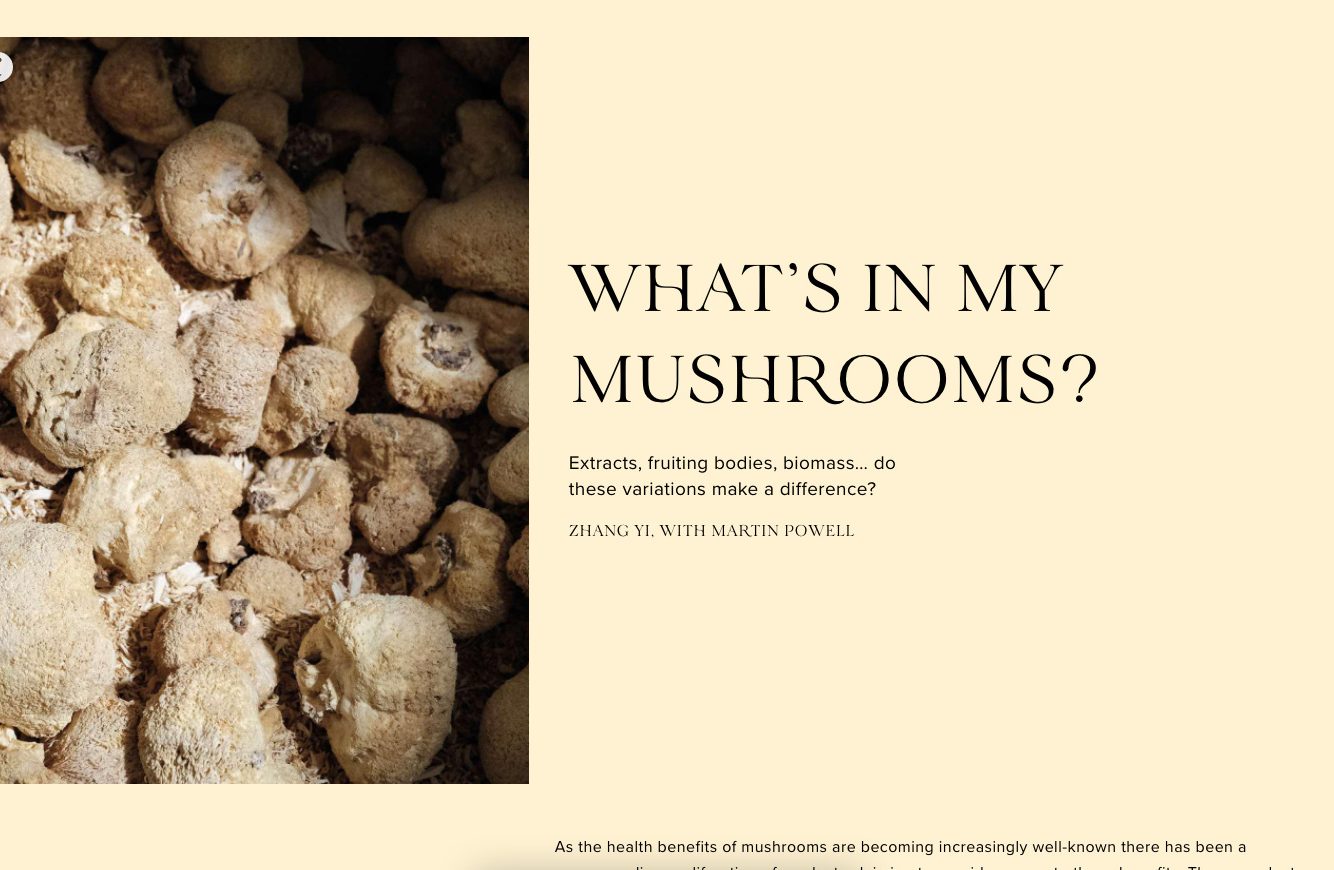 What’s in My Mushrooms?

What’s in My Mushrooms?
Extracts, fruiting bodies, biomass… do these variations make a difference?
ZHANG YI, WITH MARTIN POWELL

As the health benefits of mushrooms are becoming increasingly well-known there has been a corresponding proliferation of products claiming to provide access to these benefits. These products come in a variety of different forms that can be confusing for the consumer to understand. Some products claim to be made from the mycelium and some from the fruiting body. Some are powders and some are extracts, hot-water extracts, ethanol extracts or dual-extracts. Some might only tell you one part of the process and others use the same terms for different processes. So what is actually in your supplement/ latte/face cream?

First it is necessary to clear up a common misunderstanding. From a structural perspective mushroom mycelium and fruiting body are essentially the same. Both are composed of hyphae which either grow through the substrate as a mycelium or combine together to form a fruiting body with little difference between the two in terms of levels of the main immune-modulating β-glucans and related polysaccharides. However, not all mycelium is the same as in addition to pure mycelium produced through liquid fermentation with the liquid filtered off at the end of fermentation, mushroom mycelium is often grown on solid grain-based substrates, with the whole ‘mycelial biomass’, including the residual substrate, harvested and dried.

Ideally the label will differentiate the two but, if not, it is usually fairly easy for the customer to tell the difference, as mycelial biomass is typically a coarser powder and depending on the level of residual substrate will taste more like the original grain and less like a fermented product

Making a mushroom extract is quite a simple process consisting of six basic steps:

An additional step when extracting mushrooms such as lion’s mane, shiitake, oyster mushroom, Cordyceps militaris and Agaricus subrufescens (syn. A. blazeii) is the addition of a carrier in order to facilitate the production process. These mushrooms contain high levels of shorter chain polysaccharides (oligosaccharides formed by 3-10 simple sugars joined together) which become very sticky when exposed to the hot air in the spray-drying tower leading to blockages and wastage. In order to counteract this it is usual to add a percentage of maltodextrin (itself a polysaccharide) or superfine mushroom powder (ground to 200 mesh, 74µm). Unlike superfine mushroom powder, maltodextrin has the advantage, depending on the formulation, that it is fully soluble and has a sweet taste, making it more desirable for lifestyle products like drinks even though the end product is less ‘pure’.

Traditional pretreatment often includes crushing hard mushrooms like reishi and chaga to increase their surface area before soaking. However, this is not the most efficient way to extract all the active molecules in the mushrooms – specifically the β-glucans – from the cell wall. In order to increase the β-glucan yield, either superfine grinding before soaking or the addition of enzymes during soaking can be used to break down the cell walls. This pretreatment can roughly double the β-glucan test results (using Megazyme’s K-YBGL test kit).

Whether a mushroom should be extracted with water or ethanol or both depends on the active molecules the product is designed around. Different commercial products focus on an array of different compounds including: polysaccharides, β-glucans and α-glucans (both types of polysaccharide), nucleosides and nucleoside-derivatives, triterpenes, diterpenes and ketones.

For products where high levels of soluble polysaccharides (as opposed to insoluble fibre which is also a form of polysaccharide), β-glucans, α-glucans or nucleoside derivatives such as cordycepin are desired, hot-water extraction is typically used as these molecules are readily water soluble. Where high levels of less water-soluble components such as triterpenes, diterpenes and ketones are desired ethanol is usually the solvent of choice. However, as pure ethanol is too volatile and difficult to handle (explosions are not normally part of efficient production practices) a percentage of water is added before extraction so in practice the solvent used is a 70-75% ethanol solution.

Water being added to reishi pieces in extraction tank by Martin Powell.

A relatively new concept that has recently been increasing in popularity is ‘dual extraction’ which refers to combining the products of water and ethanol extractions. For instance making a dualextract of reishi would have the following steps, which can be modified in a number of ways to produce extracts with different specifications:

In addition, alongside traditional powdered and extracted mushroom products a new hybrid form of mushroom material, spray-dried powder, has recently been introduced to the market (also sold as 1:1 extract or just mushroom extract). Unlike traditional extracts where the insoluble components are removed by filtration, in spray-dried powders the extract is spray-dried together with the insoluble fibre (when mixed with water and left to stand this is what settles out). This produces a relatively low-cost material with high β-glucan levels when tested using Megazyme’s test kit, leading to its growing popularity.

Given the diversity of mushroom raw materials and the ability to tailor them to specific requirements it is important that brands understand what they are purchasing, and ensure that they have the most active raw material for their desired function – from moisturising to neuroplasticity. From a consumer perspective, knowing more about processing helps you to understand what you are taking, ask the right questions and find the best products on the market. It can be near impossible to find out for sure the exact processing steps the mushrooms in your product have been through, but the more traceable a brand’s supply chain the more they should know, and it’s always worth asking.

Zhang Yi has over 15 years’ experience in all aspects of the mushroom industry in China including product development and testing, and currently works for a large manufacturer supplying the international market.

Sex, Drugs, & Rot’n’mould
We use cookies on our website to give you the most relevant experience by remembering your preferences and repeat visits. By clicking “Accept All”, you consent to the use of ALL the cookies. However, you may visit "Cookie Settings" to provide a controlled consent.
Cookie SettingsAccept All