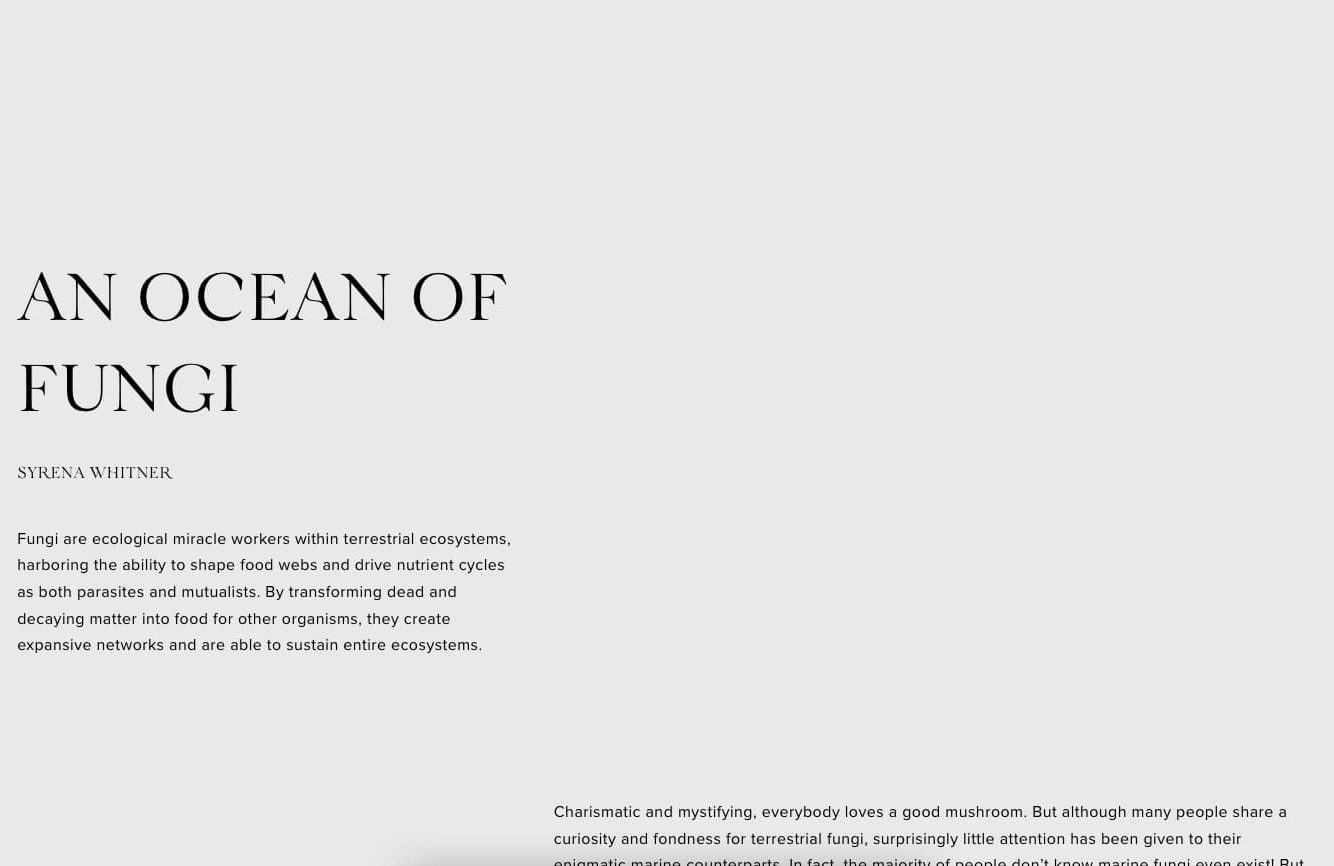 An Ocean Of Fungi

AN OCEAN OF FUNGI
SYRENA WHITNER

Fungi are ecological miracle workers within terrestrial ecosystems, harboring the ability to shape food webs and drive nutrient cycles as both parasites and mutualists. By transforming dead and decaying matter into food for other organisms, they create expansive networks and are able to sustain entire ecosystems.

Charismatic and mystifying, everybody loves a good mushroom. But although many people share a curiosity and fondness for terrestrial fungi, surprisingly little attention has been given to their enigmatic marine counterparts. In fact, the majority of people don’t know marine fungi even exist! But they’re real, they’re fascinating, and they’re likely doing incredible things within marine systems. Our planet is made up of 71% water, and 97% of that is oceans, yet marine fungi have slipped under the analytical radar for decades. It seems marine fungi contain almost entirely untapped potential for scientific discovery.

As the field of marine mycology is in its infantile stages, researchers are still actively trying to narrow down a specific definition of marine fungi, but a loose one may be ‘fungi capable of carrying out some portion of their life and reproductive cycle in marine habitats.ʼ From there, they are split into two main categories; obligate and facultative. Obligate fungi carry out their entire life cycle within marine environments (including reproduction), whereas facultative fungi can grow in both marine and terrestrial environments – an exemplary showcase for the adaptive capacity of fungi!

“MARINE FUNGI HAVE BEEN FOUND IN EVERY ECOSYSTEM SURVEYED THUS FAR, RANGING FROM COASTAL TIDE POOLS AND ARCTIC WATERS, TO DEEP SEA SEDIMENTS”

They don’t, however, develop the classic “mushroom” morphology that comes to mind when you typically think about fungi. This is because the mushroom cap is designed to help the fungi disperse spores across terrestrial ecosystems like a chimney, spreading the spores high off the ground. Surrounded by water as a means for dispersal, marine fungi never developed this ability. From what we have seen so far, they are entirely microscopic, meaning they can’t be seen with the naked eye. They exist as either free-floating spores, filamentous strands, or swimming flagellated (that is, equipped with a flagellum) fungi. They also commonly embed themselves into the tissue of different marine animals (i.e corals or sponges), making a home wherever they see fit and reaping the benefits of their chosen host.

Marine fungi have been found in every ecosystem surveyed thus far, ranging from coastal tide pools and arctic waters, to deep sea sediments. Depending on their environment, these fungi may even be extremophiles, surviving without the need for oxygen or sunlight. Many fungi have also been shown to associate with numerous marine animals, plants, and algae as either commensals or pathogens. On a microscopic level, they form tight knit networks with other members of the microbial community such as phytoplankton, zooplankton, and bacteria. Marine fungi seem to be everywhere, and associate with nearly everything. The mystery of how marine fungi are affecting their environment ecologically is a wonderfully fascinating puzzle that I’m looking forward to helping solve.

We know they are out there, and we know they are abundant, but what are they doing? Marine fungi are suspected to carry out a wide variety of classic ecological roles, acting as pathogens, saprotrophs (decomposers), or symbionts. The nature of these roles is dictated by several abiotic and biotic factors such as the species of fungi, the ecosystem in which they are found, the nutrient composition of the water column, or prey availability. Previous research suggests some marine fungi serve only one purpose (only pathogenic), while others may switch roles based on the availability of food sources (alternating from pathogenic to saprotrophic). However, as with everything in biology, there are always some wildly eccentric species with their own atypical agendas.

The saprotrophic (decomposing) fungi especially may have some incredible undiscovered potential. Researchers have already identified several marine strains capable of degrading different types of plastics, it’s certain more will be discovered, and their utility could be incredible. These fungi grow on the surface of plastics, secreting enzymes that break down the chemical bonds in plastic. This process happens over a matter of months rather than millions of years. The prospect of making these marine fungi into plastic-degrading stars has spurred an increase in research efforts, with a number of promising avenues to bioengineering a “plastic super-degrading” fungi.

Another captivating group of marine fungi is the extremophiles, found in locations such as hydrothermal vents, hot springs, and deep sea sediments. This group is unique as they have evolved to flourish in extreme temperature, oxygenation, salinity, and nutrient load conditions. From these intense environments, isolated fungi have proven to exhibit exceptional medicinal applications. These fungi produce a wide array of bioactive metabolites with anti-cancer, anti-microbial, and anti-inflammatory properties, owing to their ability to survive in seemingly inhospitable conditions. Researchers are hoping that studying fungi in these environments will lead to the discovery or synthesis of new drugs with diverse applications.

Pathogenic fungi are extremely common in both terrestrial and fresh-water ecosystems, and research suggests they are likely just as common in marine systems. As pathogens, marine fungi have the ability to control entire populations of microorganisms resulting in significant changes to food web stability and nutritional availability. Previous studies conducted in regions of coastal upwelling and in Arctic waters have documented expansive fungal parasitism of one of the keystone drivers of the marine carbon cycle: phytoplankton, specifically diatoms and dinoflagellates. Fungi attach themselves to the surface of the phytoplankton inserting a straw-like “hyphae” and proceed to steal as many nutrients as possible, ultimately killing the phytoplankton. As these microscopic algae form the base of marine food webs, a steep population decline would likely be catastrophic, leaving many larger organisms starved of a direct and vital food source.

A decrease in phytoplankton would also have severe implications for primary production and type of organic nutrients entering the water column. Fundamentally and hypothetically speaking, a pathogenic relationship between marine fungi and phytoplankton could reshape the marine carbon cycle entirely. Researchers are currently investigating the factors that contribute to parasitic fungal epidemics in hopes to prevent these phytoplankton population crashes. However, research thus far has been limited mostly to presence/absence studies, once again suggesting the need to quantify this relationship beyond proving its mere existence.

Saprotrophic fungi can be found in a wide variety of ecosystems such as benthic sediments, mangrove forests, or open oceans.

One of the most striking instances of marine fungal saprotrophs however is their role in microbial communities, once again forming a close relationship with phytoplankton (among other heterotrophic organisms as well). Like any good decomposer, they break down these previously inedible substances produced by phytoplankton and transform them into consumable nutrients for larger microorganisms and fish. This allows for extensive trophic networks to form, a process that has recently been termed the “mycoloop”. This is especially of interest to climate scientists as this process would likely modify the type and quantity of carbon available in our oceans, something necessary to accurately model global carbon budgets.

Symbiotic fungi are commonly found cohabiting sessile (or, immobile) invertebrates and marine plants such as coral, sponges, seagrass blades, and mangrove roots. In the case of corals, many fungi produce antifungal and antimicrobial compounds. The creation of these compounds helps corals prevent the invasion of pathogens following bleaching events when corals are in their most vulnerable state. In doing so they are protecting their coral host while also ensuring a safe and nutritious home for themselves. Fungi are considered integral members of the coral holobiont, so characterizing helpful fungi vs pathogenic fungi has become a high priority for coral conservation biologists. Many fungi also act as commensals of mangrove roots, either on the surface or embedding within the root itself. They reap the nutritional benefits of the mangrove essentially as freeloaders, but no harm is done to the plant in return

There are estimated to be anywhere between 1.5 to over 5 million different species of fungi on Earth. However only ~1,100 species have been recovered from marine environments thus far.

That’s only 0.1%-0.02% of all fungi, an incomprehensibly small number. This is likely a product of culture-reliant identification techniques that have been utilized in previous decades, however, with recent advancements in genomic technology the future of marine mycology is on the upswing. Beyond technological advancements, an expansion of fungal knowledge has spurred discussion of their ecological significance in the marine environment, and for human applications as well.

To mycologists it’s no longer a matter of whether they exist, but rather characterizing the community, uncovering their novel properties, and defining their eco logical roles. But the trick is increasing the exposure of marine fungi to the greater scientific community and getting them on the same playing field as other microorganisms. By shedding light on this underrepresented group, additional research may provide paths for responding strategically to some of humanity’s most compelling issues. Whether it will be through tackling the build-up of oceanic plastic waste, treating illnesses like cancer, or helping provide nutrients that support entire ecosystems, which in turn support our atmosphere, weather, and life as we know it, marine fungi can help us work out worthwhile solutions.

All images courtesy of Syrena Whitner and Amend Lab, University of Hawaii at Manoa 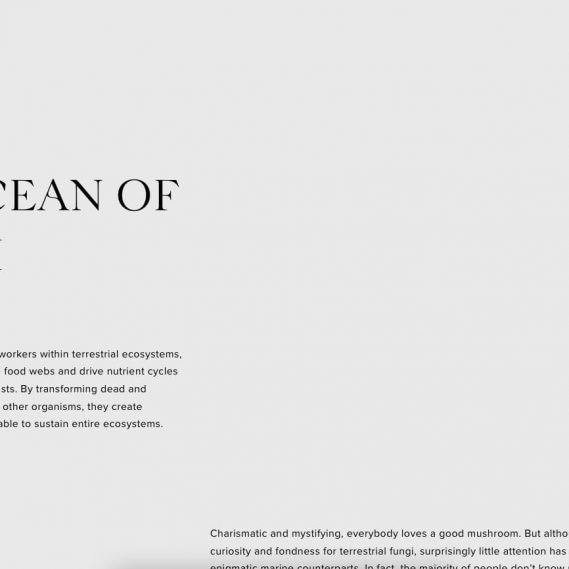