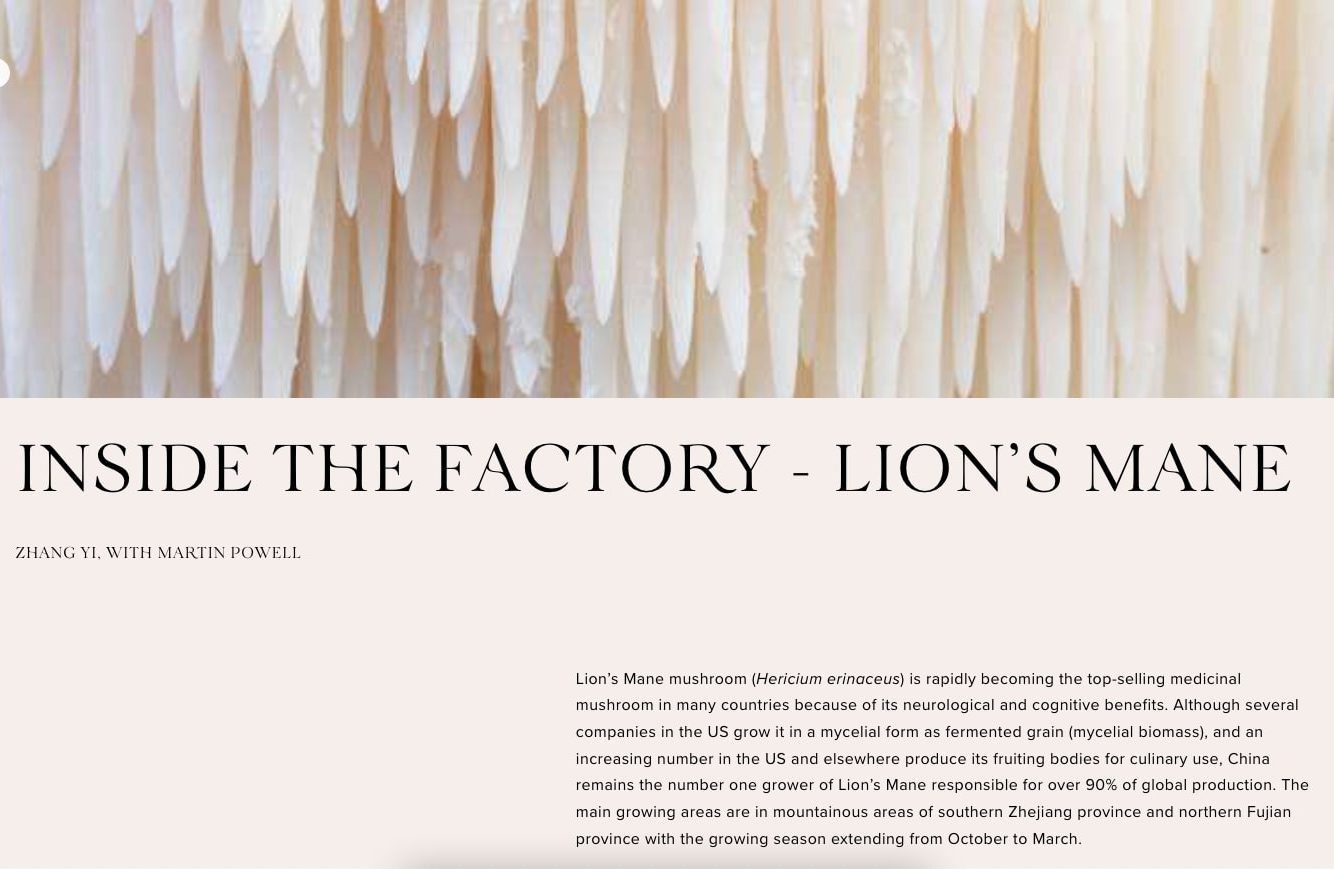 Inside the Factory – Lion’s Mane

Close up of Lion's Mane spines by Gertjan Hooijer.
INSIDE THE FACTORY - LION’S MANE
ZHANG YI, WITH MARTIN POWELL

Lion’s Mane mushroom (Hericium erinaceus) is rapidly becoming the top-selling medicinal mushroom in many countries because of its neurological and cognitive benefits. Although several companies in the US grow it in a mycelial form as fermented grain (mycelial biomass), and an increasing number in the US and elsewhere produce its fruiting bodies for culinary use, China remains the number one grower of Lion’s Mane responsible for over 90% of global production. The main growing areas are in mountainous areas of southern Zhejiang province and northern Fujian province with the growing season extending from October to March.

The mushroom cultivation industry in China is highly price sensitive and Lion’s Mane cultivation is no exception so, although it can be grown on whole hardwood logs, it has traditionally been grown on sawdust logs enriched with wheat bran. However, due to its low nitrogen level (<0.1%), sawdust is a less than ideal substrate for Lion’s Mane which thrives on a high nitrogen content and a low carbon:nitrogen ratio. In recent years there fore, farmers have increasingly shifted to a combination of 90% cotton seeds hulls (2.0% nitrogen, 27:1 carbon:nitrogen ratio) and 8% wheat bran (2.2% nitrogen, 20:1 carbon:nitrogen ratio) with 1-2% gypsum to help control the pH (cotton seed hulls contain less nitrogen than wheat bran but produce a log with a more open structure better for mycelial development).

The cultivation strains used to inoculate these artificial logs are provided by laboratories run by the provincial government and grown into spawn ready for inoculation by specialist companies who then supply the spawn or in some cases inoculated logs to the farmers. The inoculated logs are then stacked together in the growing sheds while the mycelium is colonising the logs in order for the heat generated by the growing mycelium to accelerate the process. When fully colonised after around 50-60 days, the plugs are removed from the inoculation points, introducing a moisture gradient and initiating the formation of the fruiting bodies. The logs are then placed on wooden racks.

Lion’s Mane is quite sensitive to changes in temperature and atmospheric conditions. Optimum temperature for mycelial growth is around 25°C and fruiting body formation occurs from 14-25°C with 16-18°C ideal (at lower temperatures the fruiting bodies are redder and at higher temperatures they grow faster but are yellower and less dense with longer spines). Fruiting bodies are also sensitive to CO2 levels, developing a coralliform structure when levels are above 0.1% (necessitating adequate ventilation) and light, growing best in shade conditions.

From removal of the plugs to emergence of the fruiting bodies takes around a week depending on the ambient temperature and at this point the logs are typically turned over in the belief that by growing upside-down the fruiting bodies will have a better shape and fetch a higher price. After a further 7-12 days the fruiting bodies are ready to harvest. Harvesting takes place before they have started to develop the elongated protuberances that give the mushroom its name but which make handling of the dried mushroom difficult and are accompanied by a more open structure less suitable for culinary use. Once harvested the fruiting bodies are cleaned of any residual substrate and then dried, either in the sun if the weather is suitable or in drying ovens fuelled by the spent logs (after removal of their plastic sleeves which are sent for recycling). The dried fruiting bodies are then graded according to size and shape with the better-looking ones sold for culinary use and the less attractive ones either milled into powder or processed into extracts.

In this case the starter culture is prepared in the usual way and then cultivated in a closed reactor vessel on a liquid substrate containing yeast powder and corn flour or soybean flour together with 3% glucose and 0.5% peptone.

Total production time is 60 days or more with the end of fermentation determined according to the sugar content in the fermentation liquid.

In common with other mushrooms and in agreement with its use in Traditional Chinese Medicine (TCM) Lion’s Mane extracts are mainly produced by hot-water extraction. However, with the growing emphasis on its neurological benefits and the realisation that the main compounds identified as contributing to its action in this area are more readily soluble in solvents such as alcohol there has recently been an increase in alcohol extraction, with the alcohol extract sometimes combined with the aqueous extract as a ‘dual-extract’. Aqueous extraction is typically carried out by boiling for 90 minutes and then filtering to separate the liquid extract. Sometimes this process is carried out twice using the same batch of dried mushroom, the second extraction giving a small increase in yield. Vacuum concentration (heating to 65°C under a partial vacuum) is then used to remove most of the water prior to spray-drying.

As Lion’s Mane aqueous extract, in common with extracts of other edible mushrooms such as Shiitake, Maitake, Oyster Mushroom, Cordyceps militaris and Agaricus subrufescens contains not just long chain polysaccharides but also high levels of smaller monosaccharides, disaccharides and oligosaccharides it cannot be spray-dried as is or the high temperatures in the spray-drying tower will cause the smaller sugars to caramelise into a sticky mass that will block the exit from the tower.

To prevent this maltodextrin (25-50%) or sometimes finely powdered fruiting body will usually be added prior to spray-drying. Other options include oven-drying and grinding or adding alcohol to the aqueous extract to precipitate the larger molecules which can then be filtered off and dried while the smaller molecules remain in the supernatant and are discarded. By varying the alcohol concentration the size of the polysaccharide molecules precipitated can be controlled and the process can be repeated if necessary. However, discarding some of the polysaccharides in this way will also reduce the yield and so increase the price.

Another option that has been researched as an option for removing the smaller molecules is membrane filtration but the cost of the membranes and their short lifespan due to the tendency of the pores to get clogged makes it economically unviable for now.

As mentioned above, water is not the only solvent that can be used to extract active compounds from Lion’s Mane with alcohol-extraction becoming more common due to its superior ability to extract compounds such as the hericenones and erinacines associated with promotion of nerve growth factor (NGF) generation. In this case it is used at a 70-75% concentration with the alcohol being removed for recycling prior to spray-drying.

With the recent increasing interest in Lion’s Mane’s health benefits there has been a corresponding increase in products containing it in a variety of forms. As well as aqueous and ethanolic extracts a growing number combine both as a dual-extract while in many others the aqueous extract is dried together with the insoluble mushroom fibre as a spray-dried powder or 1:1 extract. With Lion’s Mane also appearing in functional foods such as biscuits it will be exciting to see what the future holds for this versatile mushroom. 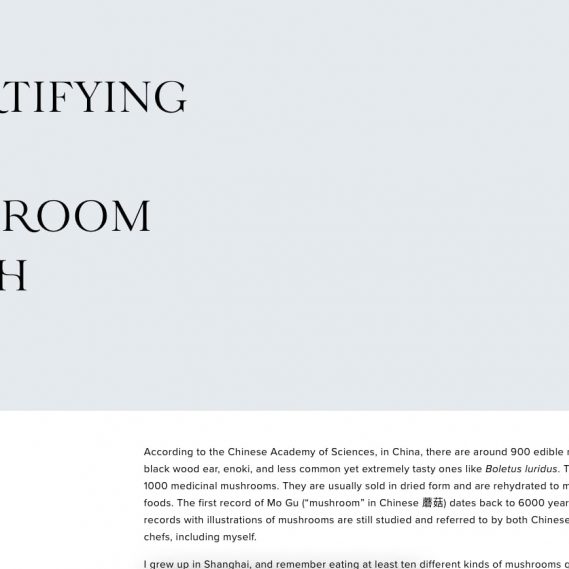 A Fortifying Tcm Mushroom Broth
We use cookies on our website to give you the most relevant experience by remembering your preferences and repeat visits. By clicking “Accept All”, you consent to the use of ALL the cookies. However, you may visit "Cookie Settings" to provide a controlled consent.
Cookie SettingsAccept All