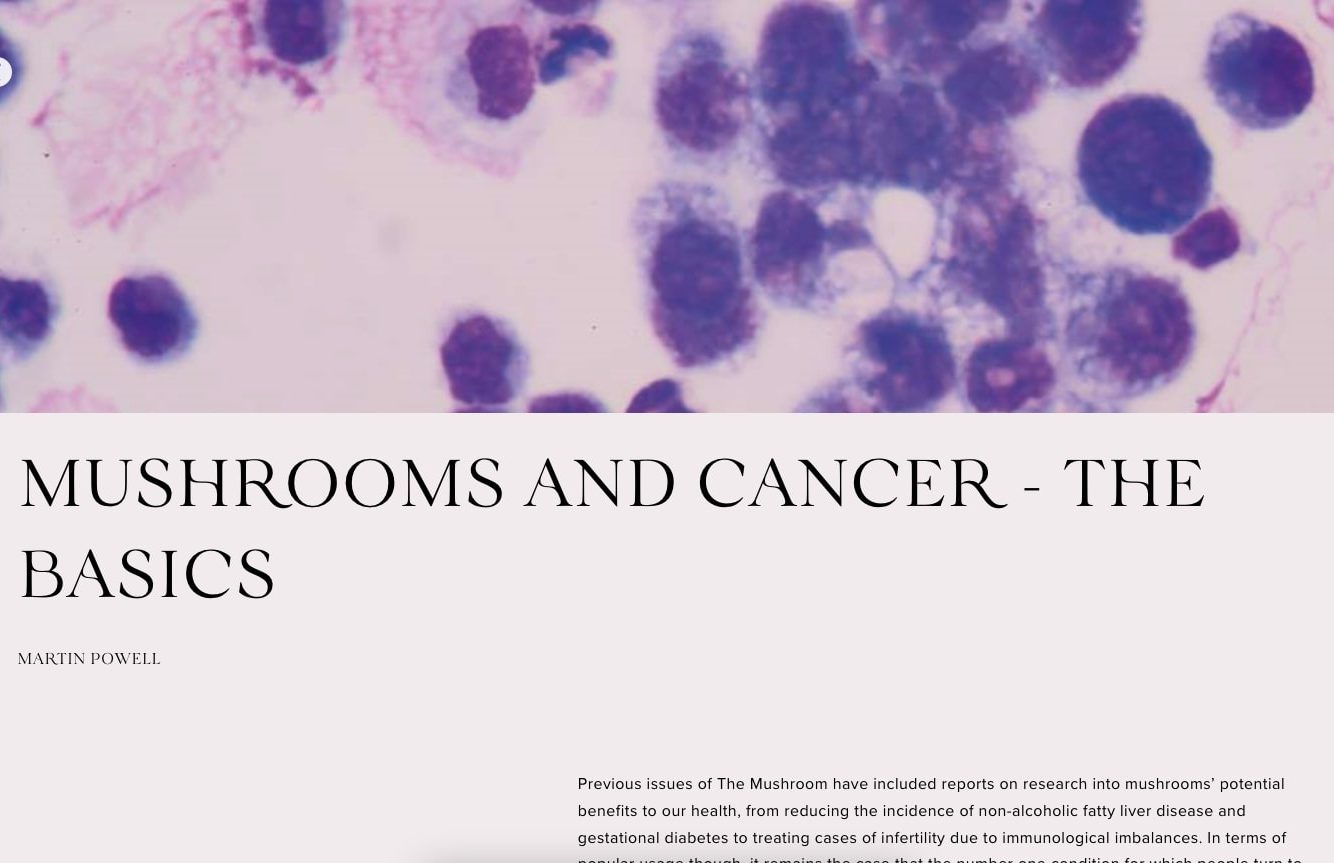 Mushrooms And Cancer – the Basics

Previous issues of The Mushroom have included reports on research into mushrooms’ potential benefits to our health, from reducing the incidence of non-alcoholic fatty liver disease and gestational diabetes to treating cases of infertility due to immunological imbalances. In terms of popular usage though, it remains the case that the number one condition for which people turn to mushrooms for support is cancer.

Although in more mycophobic countries such as the UK using mushrooms for support in cases of cancer may seem strange, in countries like China, Japan and Korea it is the norm, with mushrooms and mushroom supplements routinely used to complement conventional treatment.

This follows the traditional East Asian medical approach of ‘supporting the upright’ (Fu Zheng), supporting the body’s innate vitality and natural ability to maintain health and counter disease in the face of both the cancer itself and treatments for it such as chemo and radiotherapy.

Based on this approach a number of mushroom extracts have also been licensed as adjuvant nutrition for cancer therapy in Japan and China with largescale clinical trials reporting reductions in side-effects and extended survival times in a range of cancers alongside conventional treatments.

The clinical studies carried out using these have led many healthcare practitioners in other countries to explore their therapeutic potential too with increasing adoption in therapeutic disciplines such as nutrition, herbal medicine and naturopathy.

How do Mushrooms Work?

The ability of mushrooms to ‘support the upright’ derives from their dual actions of supporting the immune system, thus helping the body mount a balanced immune response to a range of pathogens including bacteria and viruses as well as cancer, together with their prebiotic action which helps maintain a healthy intestinal flora.

Research indicates that both these actions are the consequence of the body’s interaction with the long chain polysaccharides formed of beta-linked sugar residues (sometimes called beta-glucans or proteoglycans) that are a major component of the mushroom cell wall. As such they are found in all mushrooms and all mushrooms have a degree of immunological and prebiotic activity. Indeed several epidemiological surveys have reported a correlation between increased dietary mushroom consumption and decreased risk of developing various types of cancer.

In addition, as well as polysaccharides mushrooms produce a diverse array of smaller molecules, principally for their antimicrobial properties, with many also possessing other health benefits such as anti-inflammatory and in some cases anti-tumour.

It is this combination of immune-modulating, prebiotic polysaccharides with various categories of secondary metabolites that underpins the health benefits of many of the main medicinal mushrooms.

How safe are mushrooms?

While there are of course many poisonous species, edible mushrooms have formed part of the human diet for thousands of years and – with the exception of people who are allergic to mushrooms (~2% of the population) – can safely be consumed as supplements or as a regular part of the diet providing they are cooked (some common mushrooms including Shiitake and Enokitake contain toxic compounds that are broken down by cooking).

The same applies to the main ‘medicinal’ mushrooms. However, if suffering from bleeding or taking prescription blood thinners it is worth bearing in mind that mushrooms with high triterpene levels can have anticoagulant properties. In addition, although there is extensive clinical experience in the far East of using polysaccharide-based mushroom extracts alongside conventional anticancer agents (Flourouracil, Carboplatin, Taxol etc.) standard medical advice in western countries is to discontinue all supplements while receiving chemotherapy and further research is needed in this area.

Are some mushrooms more beneficial than others?

Although there have been many studies looking at the health benefits of various mushrooms, very few have compared the benefits of different species.

In terms of the immune-modulating polysaccharides, extracts from over 650 different species have shown immunological activity and extracts from multiple species have demonstrated prebiotic effects so it is clear that these actions are not restricted to one species or another. That is not to say that the binding specificity of mushroom polysaccharides to pattern-recognition receptors on immune cells does not vary from species to species but all species have some level of activity and the prebiotic effect is likely to be similar between species.

While polysaccharides from different mushrooms have similar actions the secondary metabolites give each mushroom more of its unique character and so a mushroom like Reishi might be preferred if some degree of anti-inflammatory and sedative action was desirable, Lion’s Mane for nerve function or Cordyceps to help support energy and promote testosterone / oestrogen production.

Is there a best way to take them?

Mushrooms come in a range of forms and there are no hard and fast rules but as the soluble polysaccharides are the key components involved in ‘supporting the upright’ it is generally desirable to maximise their intake.

In practice this usually means consuming mushroom extracts, either as powders added to soups, smoothies or taken as savoury drinks with the addition of hot-water or as capsules (capsules can be more convenient and easier for some people to take but powders work out cheaper on a daily basis).

When higher concentration options are not available or desirable, consuming mushrooms as a regular part of the diet should not be discounted and will still deliver many of their health benefits. In this case taking in soups or stews is ideal but other ways of cooking such as frying or braising are also fine and both fresh and dried mushrooms are equally good.

As more research is done and mushroom extracts become a more commonly used and hopefully better understood form of supplementation in the western medical community, it is likely that we will develop an even greater understanding of their mechanisms. As that happens, their relationship to the pathology and treatment of cancers will no doubt be explored in greater detail. This will hopefully help in the development of support protocols for those diagnosed. However it is important to note that mushrooms are not a treatment or cure for cancer. If you have or suspect you may have cancer you should always seek the guidance of your doctor or other appropriately qualified health professional.