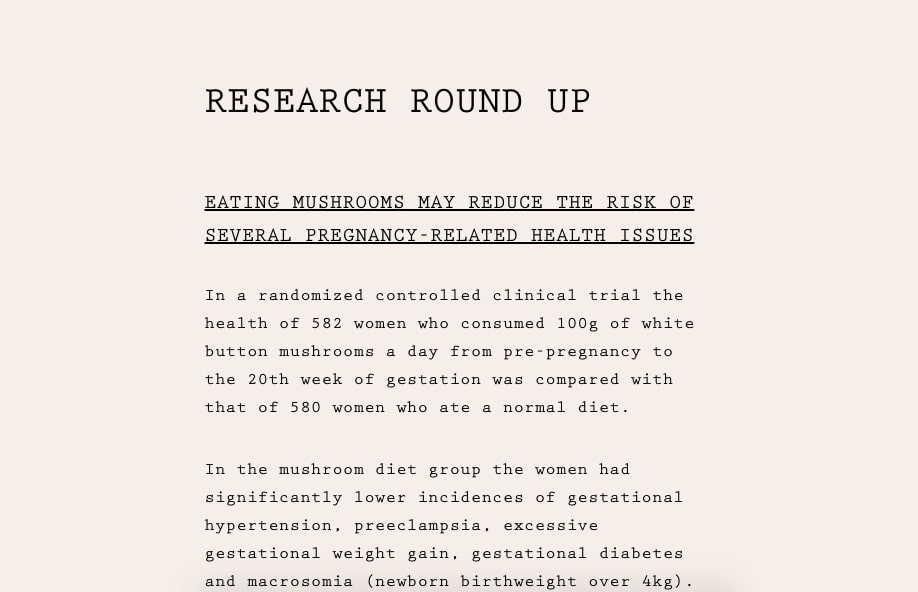 In a randomized controlled clinical trial the health of 582 women who consumed 100g of white button mushrooms a day from pre-pregnancy to the 20th week of gestation was compared with that of 580 women who ate a normal diet.

While most research to date has focussed on Reishi’s ability to protect the liver two recent animal studies have also demonstrated kidney-protective properties.

In the first study, Reishi reduced oxidative stress and kidney damage from Colistin, an antibiotic of last resort on the World Health Organization’s list of essential medicines. In the second it was shown to protect the kidneys from the chemotherapy drug Cisplatin with improvements in renal function and reductions in kidney damage, inflammation and oxidative stress.

When growing Reishi on logs buried in the soil the myceliated logs will fruit again the second year after planting, although with smaller and less abundant fruit bodies. Experience has taught the farmers that alternative crops then need to be grown for at least two years, or fresh soil brought in before Reishi can be replanted in the same location.

In part this is to reduce the risk of pests that would attack subsequent plantings but soil analysis also reveals significant changes following Reishi cultivation, with reduced humus content, pH, carbon, and nitrogen, and increased levels of iron, zinc, magnesium and copper, together with changes in bacterial and fungal populations.

In a 2019 randomized controlled trial in 31 healthy participants over the age of 50 (average age 61.3 years) the treatment group (3.2g/day powdered Lion’s Mane fruiting body in cookies for 12 weeks) showed improved cognitive function compared to the control group while in a 2020 study participants given 1.05g/day of H. erinaeus mycelia containing 5mg/g erinacine A for 49 weeks showed improved scores across a range of cognitive function tests.

At the same time it is becoming clear that the benefits of mushrooms for health conditions such as Alzheimer’s Disease (AD) is not restricted to Lion’s Mane. With oxidative stress proposed as a contributory factor to the development of AD various groups of researchers are looking at the possibility that a broader range of mushrooms may be of benefit.

In one study, Reishi hot-water extract was given to rats with cholesterol-induced AD producing improvements in learning and memory deficits, while in another King Oyster Mushroom (Pleurotus eryngii) was given to mice with Amyloid beta (AB) induced AD with improvements in learning and memory deficits as well as delayed brain atrophy and reduced AB plaque deposition.

With today’s increasing awareness of mushrooms’ health benefits, there is growing interest in ways to incorporate mushrooms into people’s daily diet, including as a component in baked goods.

One 2019 paper looked at the inclusion of King Oyster mushroom (P. eryngii) flour in cookies and reported an increase in sensory scores in line with the amount of mushroom flour incorporated with 15% perceived to be the optimum.

In a contribution to the ongoing debate about the possible adverse effects of mushroom harvesting on species diversity and abundance, two harvested and two carefully matched non-harvested plots were established in the Mixteca region near Oaxaca in Mexico with mushroom fruit bodies collected weekly from June-October.

A recent paper adds to the growing body of evidence that regular mushroom consumption reduces the risk of developing cancer.

This relationship was especially obvious in men over the age of 50 and was not affected by consumption of other food groups.

A recent epidemiological study in China has shown a reduction in the incidence of newly diagnosed non-alcoholic fatty liver disease with increased mushroom consumption, while a number of other studies have pointed to some of the mechanisms involved.

In separate studies polysaccharides from Maitake (Grifola frondosa) and polysaccharide-peptides from Hairy Wood Ear (Auricularia polytricha) were shown to protect against NAFLD in rats at 150mg/kg in the Maitake study and 50-100mg/kg in the Wood Ear study. Significant changes in the gut microbiota were also reported in the Maitake study, with the suggestion that this may be a major contributing factor to its protective effect.

In a third study, Agaricus subrufescens (syn. A. brasiliensis) supplementation prevented the development of the more severe non-alcoholic steatohepatitis in mice fed a high fat, high cholesterol diet when included at 5% of their feed.

Agaricus brasiliensis KA21 May Prevent Diet-Induced Nash Through Its Antioxidant, Anti-Inflammatory, and Anti-Fibrotic Activities in the Liver. Nakamura A. et al. Foods. 2019 Nov; 8(11): 546.

Produced by supercritical CO2 extraction of the spores, Reishi spore oil (RSO), with its high levels of fatty acids, sterols and triterpenes, is an increasingly popular supplement in China especially for cases of cancer. Now a recent paper points to possible skin health benefits too.

In a mouse burn model RSO was shown to regulate the bacteria present on the skin resulting in decreased inflammation and significantly accelerated skin wound healing in comparison with antibiotic treatment.

With the current pandemic likely to be with us for a while, the potential benefits of medicinal mushrooms in treating it have been reviewed in a number of recent papers.

In an in-vitro model of lung injury, beta-glucans from Shiitake were reported to reduce production of inflammatory cytokines. Studies showing similar reductions in inflammatory immune activity from a mixture of Sun Agaric, Maitake and Lion’s Mane extract have also been reviewed. In a third paper the potential anti-inflammatory and anti-viral benefits of Chaga are highlighted.

The ability of Cordyceps to protect against acute lung injury was also reported in a recent study using an extract identified as being of Ophiocordyceps sinensis in mice at doses of 10, 30 and 60mg/kg/day with higher doses providing greater protection.

More commonly used to treat cognitive impairment and neurodegenerative disorders, a number of pre-clinical and clinical studies reviewed in a recent paper indicate that Lion’s Mane may also have a role to play in assisting with the management of depression.

In one recent study a combination of Lion’s Mane mycelial biomass (80%) and fruiting body dual extract (20% – water / ethanol) alleviated symptoms of depression and anxiety as well as sleep disorders when given to a group of 77 overweight individuals at a dose of 1,500mg/day.

In a recent study in mice V. robiniophila (‘Huaier’ in Chinese) extract was shown to suppress growth and metastasis of malignant melanoma with concomitant downregulation of cell-signalling pathways involved in cancer cell growth at a dose of 5mg/kg/day with effect seen from day 21 of administration.

Could Reishi Help Alleviate the Adverse Psychological Effects of Binge-drinking?

In rats fed alcohol at 3g/kg/day on a repeat basis supplementation with Reishi aqueous extract (100mg/kg/day) for three consecutive days starting 24 hours after the last alcohol intake produced significant improvement in short-term memory, reductions in anxiety and depression related behaviour as well as recovery of normal explorative capacity compared to rats given alcohol but not Reishi extract.

As well as its multiple other health benefits a recent paper reported that an alcohol extract of dried mushrooms identified as Sanghuangporus sanghuang (syn. Phellinus linteus) induced vasodilation in rat arteries in a dose-dependent manner with possible benefits for cardiovascular health including blood circulation and hypertension.

Based on gas chromatography the researchers also tentatively identified the presence of betulin in the extract at 2.19%. However, as the mushrooms were bought in a Seoul herb market it is not possible to be sure that they were all S. sanghuang with a high probability that they would have included other Sanghuangporus species growing on hosts other than mulberry trees.

In a study on 354 healthy Japanese adults mushrooms were the food group with the greatest positive impact on gut bacterial diversity (bread had the greatest negative impact).

In two other in-vivo studies polysaccharides from Wood Ear were shown to help prevent colitis through modulation of the gut microbiome and polysaccharides from wild morels increased populations of short-chain-fatty-acid (SFCA) producing bacteria and production of SCFA’s in mice treated with the chemotherapeutic agent cyclophosphamide (CP) as well as restoring spleen weight and increasing white blood cell count in CP-treated mice.

Long considered somewhat unglamorous, mushrooms’ potential health and biotechnology applications have recently led to their getting increasing attention from business and from investors.

In February 2020 MycoWorks, based in Emeryville, California raised US$17 million and is expanding into a third production facility with the capacity to produce 80,000 square feet a year of their high-end Reishi mycelium leather substitute.

In August 2020 US company MycoTechnology raised US$39 million to expand its mushroom-derived functional ingredients business.Key products include ClearTaste which masks bitter tastes and PureTaste, a plant protein made from Shiitake-fermented rice and pea protein.

Back in 2018 Funguys Inc. raised US$5.4 million to expand sales of their Four Sigmatic brand of coffees and teas and last year Giorgio Companies, Inc. Mushrooms, one of the largest mushroom growers in the US, took a first step into the functional health market with a stake in Canadian company FreshCap Mushrooms. 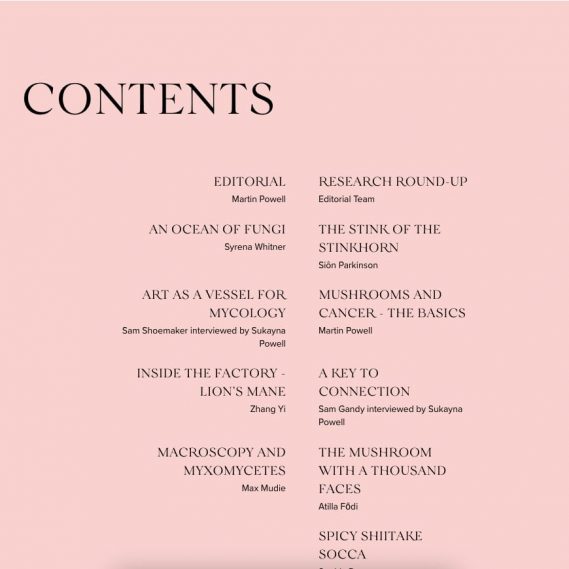 Contents
We use cookies on our website to give you the most relevant experience by remembering your preferences and repeat visits. By clicking “Accept All”, you consent to the use of ALL the cookies. However, you may visit "Cookie Settings" to provide a controlled consent.
Cookie SettingsAccept All