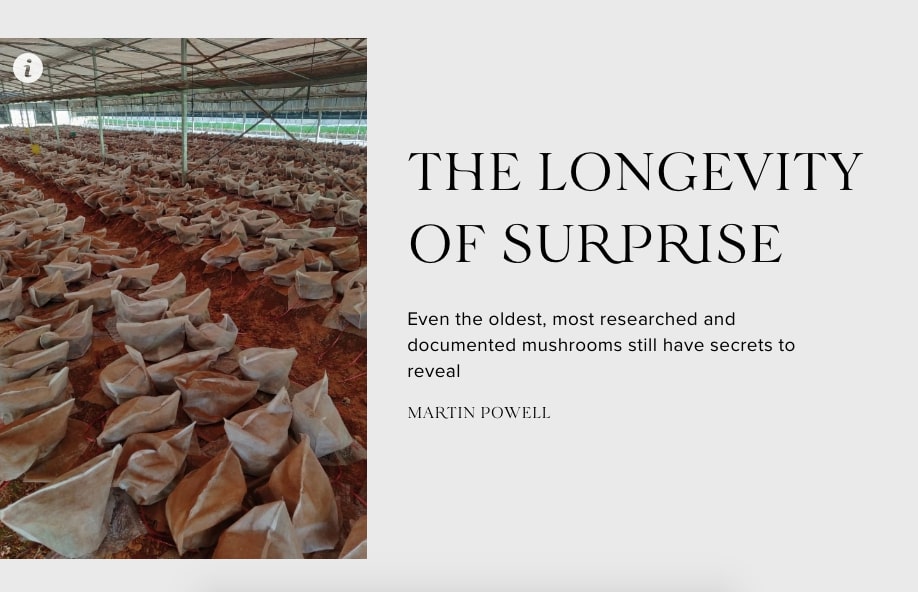 The Longevity of Surprise

The Longevity of Surprise
Even the oldest, most researched and documented mushrooms still have secrets to reveal
Martin Powell

Reishi grew on the land of the virtuous king

And Zhu Cao* covered the banks of the river Luo.

Radiant as though with divine light.

There is so much we do not know about mushrooms that working with them is almost inevitably a journey of discovery. This applies even to some of the best known mushrooms, even one as ancient and well known as Reishi.

A number of years ago a colleague of mine, a doctor of Chinese medicine living in the north of England, called to say that he had a mushroom growing in his garden that looked a lot like Reishi. He thought this was impossible. When, however, he sent a photo of the mushroom growing on his plum tree, it was, sure enough, a fine specimen of Ganoderma lucidum.

What my colleague did not know was that Ganoderma lucidum, the species typically identified with the Chinese mushroom Ling Zhi (Reishi in Japanese) was first described in 1781 based on a specimen collected in Peckham, South London.

The corollary of this is that, contrary to every Chinese herbal materia medica and most other published material, the Ling Zhi / Reishi sold in China / Japan is not in fact G. lucidum but mainly the closely related species G. sichuanense (also known as G. lingzhi, with the correct name the subject of ongoing debate) as well as smaller quantities of other species such as G. sinensis.

“LING ZHI WAS FIRST DESCRIBED BASED ON A SPECIMEN COLLECTED IN PECKHAM, SOUTH LONDON”

Fortunately from a therapeutic point of view G. sichuanense and G. lucidum are interchangeable with similar active compounds. G. sinensis on the other hand has significantly lower levels of the triterpenes responsible for many of Reishi’s health benefits (anti-inflammatory, sedative etc.) although its resulting lack of bitter components makes it ideal for consumption as a tea.

In some ways this multiplicity of species echoes the representation of Reishi in classical Chinese literature, where the herb Zhi was categorised under six colours: Red, Black, Purple, Green, White and Yellow according to the Five Element system with each colour being related to an organ system in the body: Red – Heart, Yellow – Spleen, White – Lungs, Black – Kidneys and Green – Liver with Purple occupying a place of balance between them.

Rather than being different versions of one species it is now believed that most of these colours in fact relate to different species with G. sichuanense being the classical ‘red’ or ‘cinnabar’ Zhi and G. sinensis the purple.

The second thing I learnt was that it always pays to read the label. When I first started using mushrooms with my patients, I assumed that all Reishi was the same, when in practice Reishi products contain a wide variety of different forms of the mushroom.

Powdered fruiting body is generally the cheapest form, but it is also the least beneficial, as it is quite indigestible and has low levels of soluble immune-modulating polysaccharides and triterpenes.

Mycelium grown by liquid fermentation is another low cost option that is more digestible than powdered fruiting bodies, while mycelial biomass (mushroom fermented grain) is popular in some markets. Although levels of mushroom polysaccharides and triterpenes are low in both forms, depending on the length of grow cycle they can contain higher levels of antimicrobial secondary metabolites than the fruiting bodies, with Reish mycelium containing as much as thirteen times more lovastatin (lovastatin, widely prescribed to lower cholesterol, is produced by many mushrooms for its antifungal properties).

Another form of Reishi supplement gaining popularity, especially in China, are Reishi spores. The prodigious quantities in which these microscopic particles (average size 4-6 μm) are produced means that some strains can produce an equivalent weight of spores over the usual 8-week harvesting period to the weight of the fruiting body itself.

Like plant seeds, Reishi spores contain high levels of energy-dense fatty acids and related compounds including sterols and triterpenes, which together contribute to their wide-ranging health benefits especially in relation to cancers and neurological conditions. Another reason for their popularity is that, after their hard outer walls are broken, they taste amazing; smooth and rich with a hint of bitterness – rather like chocolate!

Reishi extracts, although more expensive, are typically the most effective form of Reishi clinically, delivering both higher levels of active components and superior bioavailability. Hot-water extracts in particular are rich in soluble beta-glucans and related polysaccharides while alcohol extracts can contain up to 20% triterpenes and dual-extracts combine the benefits of both in varying proportions.

“REISHI CAN BE GROWN ON A SURPRISINGLY DIVERSE RANGE OF SUBSTRATES”

Traditionally cultivated on whole logs, Reishi can also be grown on a surprisingly diverse range of substrates. As well as the grain-based substrates mentioned above researchers in China have also been able to grow Reishi on a range of other plant materials including salt-tolerant fast-growing reeds such as Pennisetum giganteum with the resulting Reishi actually having higher triterpene levels than traditional loggrown Reishi.

In my experience I have found that it is always wise never to underestimate Reishi, whether for its health benefits or the surprising places it pops up. As well as protecting the liver, including from the after effects of binge drinking (see Page 53), it now seems that Reishi may also help prevent drug-induced kidney damage.

At the same time, various high-end leather substitutes made from Reishi mycelium are generating interest in the fashion world, joining other mycelium-based leathers aiming to transform attitudes and reduce environmental impact.

Reishi is also emerging for as a promising candidate for immune support in relation to the current pandemic due to the immune-modulation of its polysaccharides and the anti-inflammatory and angiotensin-converting enzyme inhibiting activity of some of its triterpenes (lowering the level of the receptor through which Covid-19 enters the cell).

Although perhaps not quite a ‘Mushroom of Immortality’ It is easy to see why Reishi was so highly revered in traditional Chinese culture and I for one am looking forward to what new surprises it has in store for us. 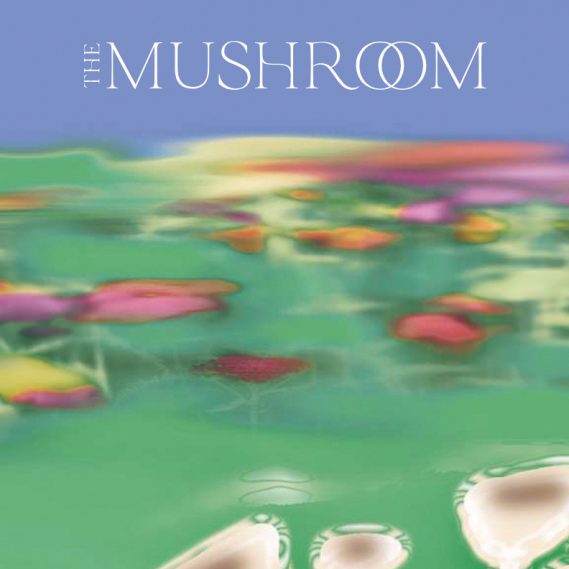 Cover
We use cookies on our website to give you the most relevant experience by remembering your preferences and repeat visits. By clicking “Accept All”, you consent to the use of ALL the cookies. However, you may visit "Cookie Settings" to provide a controlled consent.
Cookie SettingsAccept All