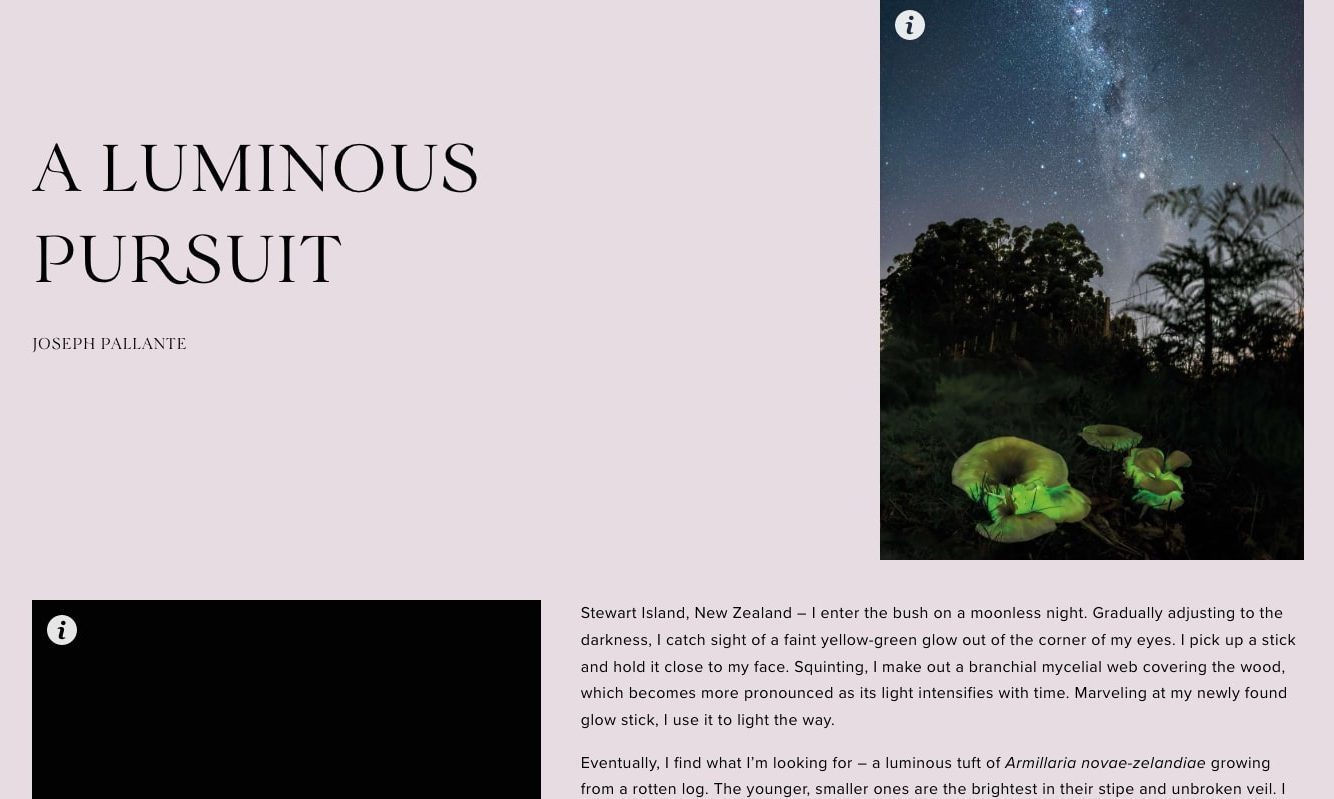 Stewart Island, New Zealand – I enter the bush on a moonless night. Gradually adjusting to the darkness, I catch sight of a faint yellow-green glow out of the corner of my eyes. I pick up a stick and hold it close to my face. Squinting, I make out a branchial mycelial web covering the wood, which becomes more pronounced as its light intensifies with time. Marveling at my newly found glow stick, I use it to light the way.

Eventually, I find what I’m looking for – a luminous tuft of Armillaria novae-zelandiae growing from a rotten log. The younger, smaller ones are the brightest in their stipe and unbroken veil. I look down, and now the forest floor beneath my feet radiates a ghostly glow.

Bioluminescence is a chemical reaction that occurs when fungi break down and consume rotting wood and leaves. The basic chemistry is simple: a small molecule, dubbed luciferin after the Latin word for ‘light-bringer’, is recognized and oxidized by an enzyme called luciferase, releasing light in the process (usually at a 520-530nm wavelength).

This phenomenon is observed in three distinct evolutionary lineages of fungi: Armillaria, Omphalotus and Mycenoid and is believed to attract insects that disperse spores across the forest canopy, while at the same time possibly deterring fungivores from consuming the mushrooms, as prey display bright colors to ward off predators.

Observing fungal bioluminescence, also known as ‘foxfire’, is a surreal and otherworldly experience. It is no wonder that this ‘fairy light’ or ‘shining wood’ has frequently been relegated to the mystical in literature and folklore, inspiring cultural traditions that range from a strong reverence to fear.

In European folklore, the puzzling and disorientating will-o-the-wisp lures people deeper and deeper into the woods but is ultimately unreachable. In Thailand, a glowing mushroom in the Kohnkaen province is called the ‘Krasue Mushroom’, named after a nocturnal female spirit of Southeast Asian folklore, believed to be a cursed individual reborn as a ghost. At night her luminous head floats, separated from her body, and is drawn to the scent of blood. And some Australian Aboriginal/First Nations peoples associate Omphalotus nidiformis, or ghost fungus, with spirits. Panellus stipticus, the bitter oysterling mushroom, was believed by North American settler-colonists to be supernatural fairy-lights that would lead you to your doom if you followed them.

The first account of foxfire was made by Aristotle, whose notes refer to a light that, unlike fire, was cold to the touch. Correspondence between inventor Benjamin Gale and Benjamin Franklin proposed foxfire to illuminate the needles on the barometer and compass of Turtle, an early submarine. During World War One soldiers nailed bits of luminous wood to their helmets and bayonets – it provided just enough light, but not enough to make them targets.

These uses, however, seem rudimentary compared to the new vistas opening up in the world of gene editing. Recently, Neonothopanus nambi was used to genetically engineer tobacco plants to produce their own light. Achieved by converting caffeic acid into luciferin, this self-sustained luminescence is easily visible to the naked eye. Besides creating ‘plant nightlights’, luminosity can be used to map and literally highlight physiological processes. This visual communication even offers bio-imaging techniques to diagnose pharmacological treatment efficacy in animals.

Nutrient cycling and decomposition could now rely on filamentous fungal bioluminescent-based biosensors and indicators to monitor pollutants and detect heavy metals. Soil is paramount for our survival as a species, and without healthy ground beneath our feet, we risk massive depletion of our stock of viable arable land. Bioluminescent biosensors would change the landscape for mycoremediation efforts, making for an effective diagnostic tool.

Out of the 150,000 described species of fungi, only around one hundred have been observed to emit light, but there are certainly more. Deforestation and urban development have significantly encroached on the planet’s biodiversity. Light pollution hinders the ability to witness this primordial phenomenon, and much has been squashed underfoot while pursuing unsustainable growth and development. For now, the forest at night holds the allure and excitement of witnessing undocumented bioluminescent mushrooms. This luminous pursuit is worthwhile, and for those willing to undertake the search in what wild forest does remain, there is still plenty to be discovered. 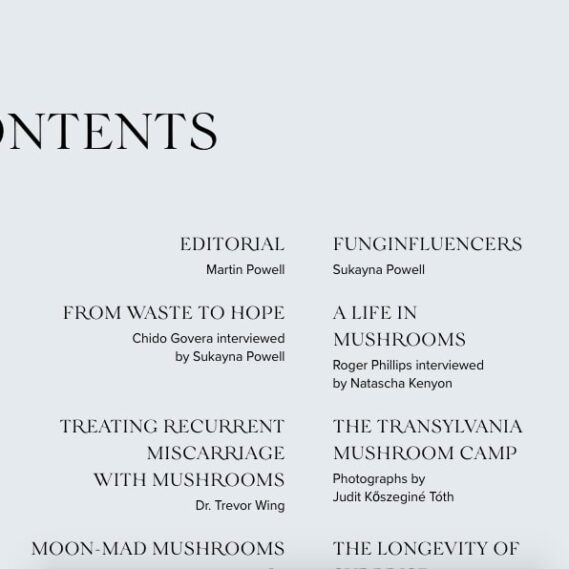 Editorial
We use cookies on our website to give you the most relevant experience by remembering your preferences and repeat visits. By clicking “Accept All”, you consent to the use of ALL the cookies. However, you may visit "Cookie Settings" to provide a controlled consent.
Cookie SettingsAccept All