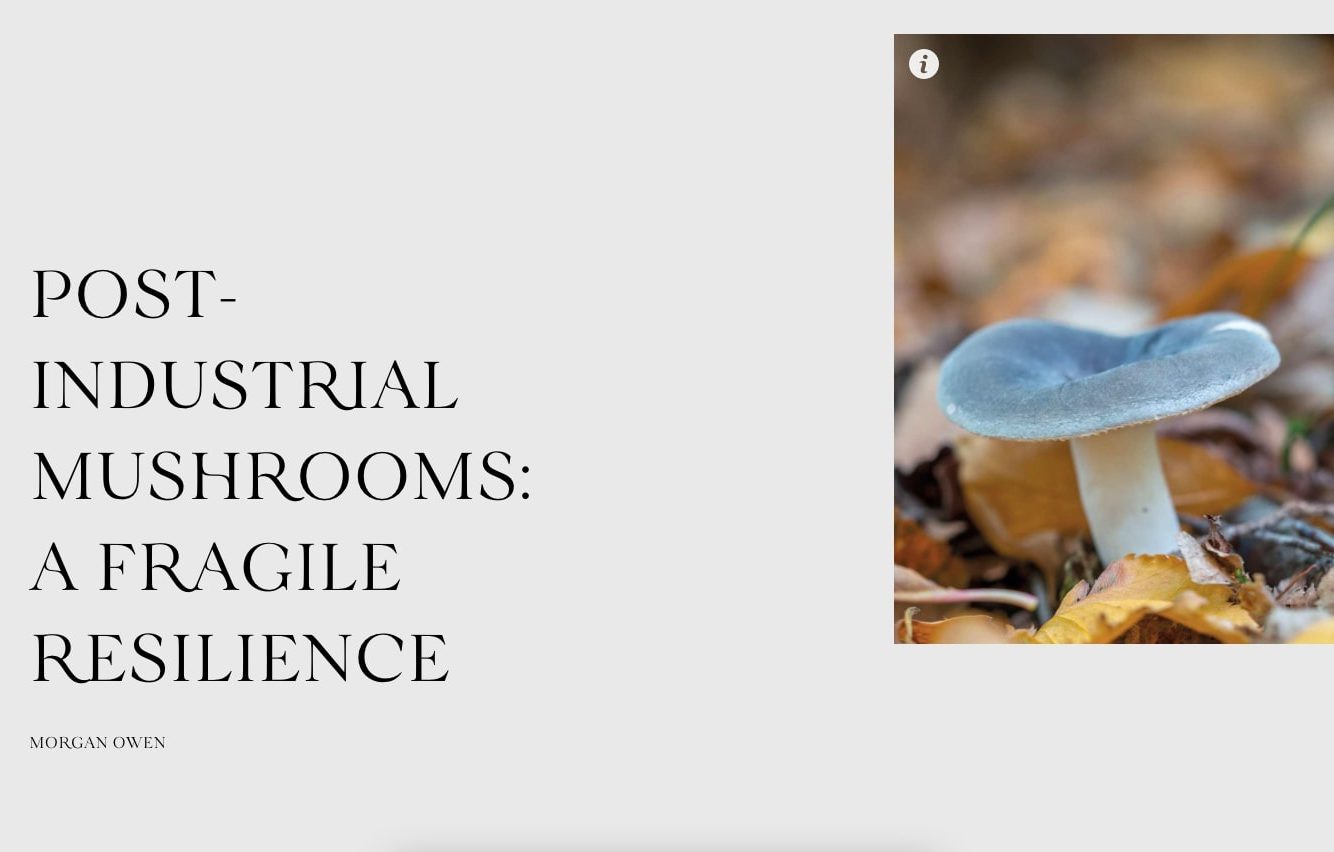 “THE BETTER KNOWN PLACES LIKE THESE ARE, THE MORE EASILY THEY CAN BE MONITORED, RECORDED AND DEFENDED. THEY ARE OTHERWISE AT THE MERCY OF A FIELD ASSESSMENT – MAYBE A SINGLE VISIT – AND A PLANNING COMMITTEE”

It’s an unlikely place to encounter such fungal diversity at first glance. Facing east you’ll see the black scar of one of Europe’s largest opencast mines, Ffos y Frân, and below it, on the valley floor, the centre of Merthyr Tydfil, one of Wales’ most populous towns. Turn towards the north and you’ll see Fan Fawr and the Brecon Beacons National Park in the near distance. To the west a mixture of heath, grassland, oak and birch woodland, and higher up a plantation of conifers and heavily-grazed mountainside. To the south the outlying villages of Merthyr wind towards Cardiff, twenty-five miles away along the river Taff in a more or less unbroken chain of settlements. This is Cwm Glo a Glyndyrys, a post-industrial Site of Special Scientific Interest of international significance for waxcaps, over 32 species of which have been recorded here, making it, in the words if its SSSI citation, ‘one of the best sites for these attractive fungi in western Europe’.

Much of this land consists of old spoil heaps and colliery tips, the result of two centuries of coal mining. The mines fed the Cyfarthfa Ironworks, which were among the largest in the world at their peak, before dwindling in the first quarter of the twentieth century. In the late summer and autumn, when the grasses are thick and springy, you’d hardly believe what’s under your feet, but here and there a wellworn path reveals the dark, greyish slag underneath. It’s at this time of year that the first mushrooms begin to attract attention: common puffballs, field mushrooms, horse mushrooms, and parasol mushrooms. This is when I’ll visit home and set out at dawn to collect this unregarded feast, never seeing anybody else and feeling quite apart from the town, though the supermarkets and the retail park are barely a few minutes away.

This is so-called ‘unimproved grassland’, also known as ‘old grassland’. The lack of ‘improvement’ refers to its not being tilled, ploughed, fertilised, reseeded, or sprayed with pesticides, though it is occasionally grazed, which is vital in this particular case. Such grassland is now rare in the UK, and has receded to less than 5% of its former range, wiped out by agriculture and ‘development’. The loss of these habitats is particularly alarming for the many rare fungi that thrive on them. At Cwm Glo a Glyndyrys, you’ll find such rare waxcaps as the pink waxcap, the nitrous waxcap, the dingy waxcap and Hygrocybe ingrata, in addition to three of the four grassland species on the UK Biodiversity Action Plan list: the big blue pinkgill, the olive earthtongue, and the dark-purple earthtongue. These mushrooms are extremely sensitive to the ‘improvements’ mentioned above, and interfering with the soil would cause them to disappear altogether. At Cwmglo a Glyndyrys, despite what would have seemed a very poor beginning, the grass can grow and the soil can go through its motions of growth and decay without hindrance – the benefit of being left alone. It is not agricultural land nor is it convenient enough for housing – it’s just there, wonderfully there.

“SEARCHING FOR MUSHROOMS IN UNEXPECTED PLACES IS NOT AN END IN ITSELF, THEN, NOR A MEANS OF FINDING SOMETHING ELSE, NOR A MERE PRETEXT FOR BROADER ENVIRONMENTAL PROTECTION. TO SEEK THEM OUT IS TO KNOW THE WHOLE, AND BE A PART OF IT”

From the edge of the tip, I can see the abandoned Hoover factory, but at my feet is a profusion of heath and crimson waxcaps. Here there is a shifting creative tension between desolation and regeneration, industry and nature. The fungi found here seem especially to exemplify this, and underpin the ecology of this simultaneously fragile and resilient site. The ruinous landscapes of the coalfield became the rare, lost grasslands, and a refutation of those unkind stereotypes of Merthyr as a place of lifeless gloom. At the edges of the grassland are pockets of semi-ancient oak woodland which miraculously survived the mines and the ironworks, clinging on in the deeper, narrower dales. There you’ll find wood sorrel and bluebells as early summer approaches, and in the early autumn ceps abound. I often wonder how many of the people of Heolgerrig, minutes away, know that the porcini mushrooms they eat in their pasta grow almost in their gardens.

Despite this transformation and rebirth, destruction looms near this mostly unknown place. When the SSSI’s current borders were confirmed in 2008, it was already threatened by a large ‘development’ – a leisure village of sorts – and settlement boundaries and ecological surveys were hotly contested. The plans also included, unforgivably, opencast mining, as the coal seams here have barely been scratched even after two centuries of activity. The abundance of rare fungi, specifically waxcaps, was the defining factor in the conferring of SSSI status on Cwmglo a Glyndyrys and the eventual dismissal of the planning application. Mushrooms in effect saved this rich habitat from annihilation. However, it wasn’t the fact of the land’s ecological diversity that stopped the development as such, but a bureaucratic decision. The land cannot and did not speak for itself, and therefore human awareness of its value remains immensely important. The better known places like these are, the more easily they can be monitored, recorded and defended. They are otherwise at the mercy of a field assessment – maybe a single visit – and a planning committee.

In the woods, I am no further from the town though it feels impossibly far away. The gnarled trunks and thick, mossy leaf litter suggest that it is untouched by humans, but this is not the case. Look closely and you’ll find the ruins of walls, the foundation of a house or a pumping station. What might be a deeply carved holloway is the remains of a canal, and here and there a rusted piece of rail or a glassy piece of slag has come to the surface. Even at its peak of ecological diversity, this is not a natural landscape, but one that has adapted and survived. The mushrooms seem particularly at home here: charcoal burners, fly agarics, white false death caps, woolly milkcaps, birch milkcaps, fragile brittlegills, grisettes, stinkhorns, girdled webcaps, blushers, ceps, brown birch boletes and sweet tooth to name only a few. And the deadwood and stumps in particular are alive with turkey tails, honey fungi, hen of the woods and a multitude of bracket fungi. Due to these woods not being managed, they are not cleared: when trees and branches fall, they stay where they are, ready to be decomposed. Though not an ‘unspoilt’ landscape, here the woods can run the full cycle of decay, and the fungi which allow this are undisturbed, bringing forth life from what some might see as neglect. The post-industrial here, too, has become a surrogate for an increasingly rare habitat: uncleared woodland. This is a fragile resilience, for as vigorous or indeed miraculous as this regeneration is, it can be taken away in an instant.

As I crouch down to look closely at a tiny – and rare – garlic waxcap among a broader scattering of golden, snowy, butter, meadow and honey waxcaps, I’m haunted by desolation. Another development has been proposed, ‘Rhydycar West’, whose site plans encompass Cwmglo a Glyndyrys. Though it is unlikely that permission would be given to build on the SSSI itself, portions of the land that form the larger habitat are not encompassed by the SSSI, and therefore lack the same level of protection. There is no natural physical boundary to separate Cwmglo a Glyndyrys and this adjoining land, which contains semi-ancient woodland, heath, bog and fen-meadow. The thought of losing such habitats, or at least fragmenting them, is distressing: it is already valuable beyond description, and the talk of the money that the development would apparently bring is a reminder of how value is understood in such sterile economic terms. The offshore company responsible for the plans has already questioned some of the boundaries of the adjacent Sites of Importance for Nature Conservation (SINCs), but thankfully the council has stood firm so far. The planning application has not yet been submitted, but is expected soon.

Mushrooms already saved this land once, and they might very well do so again, but this is about much more than Cwmglo a Glyndyrys. How many more sites of fungal diversity are there, unknown, unprotected? There are rare mushrooms, of course, but just as rare sometimes are the people looking for them. Maybe what is needed is a reappraisal of typical mushroom habitats by casting the net wider and acknowledging their astonishing adaptability and variety. It’s not just explicitly post-industrial sites that offer such refuges of resilience and regeneration: urban churchyards and graveyards have become some our most important sites for fungi, and in particular waxcaps, and so too have many urban parks. A greater public awareness of mushrooms in peripheral and post-industrial places would nurture knowledge of the interconnected ecosystems that are to be found there and their indivisibility from those more obvious and more widely-regarded habitats. Searching for mushrooms in unexpected places is not an end, nor a means of finding something else, nor a mere pretext for broader environmental protection. To seek them out is to know the whole, and be a part of it.

“EVEN AT ITS PEAK OF ECOLOGICAL DIVERSITY, THIS IS NOT A NATUR AL LANDSCAPE, BUT ONE THAT HAS ADAPTED AND SURVIVED. THE MUSHROOMS SEEM PARTICULARLY AT HOME HERE” 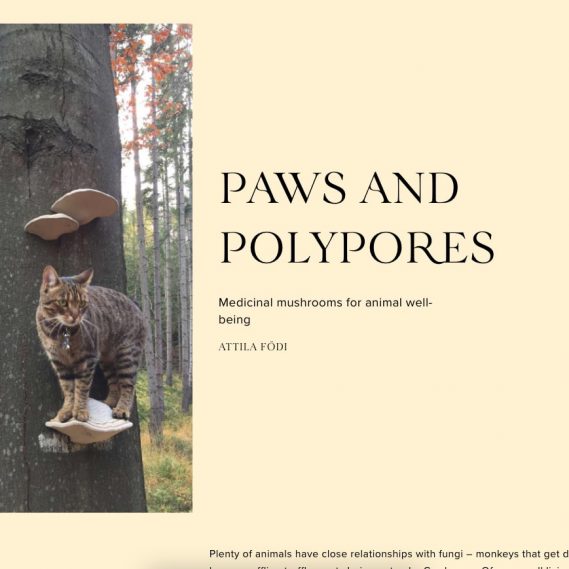 Paws and Polypores
We use cookies on our website to give you the most relevant experience by remembering your preferences and repeat visits. By clicking “Accept All”, you consent to the use of ALL the cookies. However, you may visit "Cookie Settings" to provide a controlled consent.
Cookie SettingsAccept All