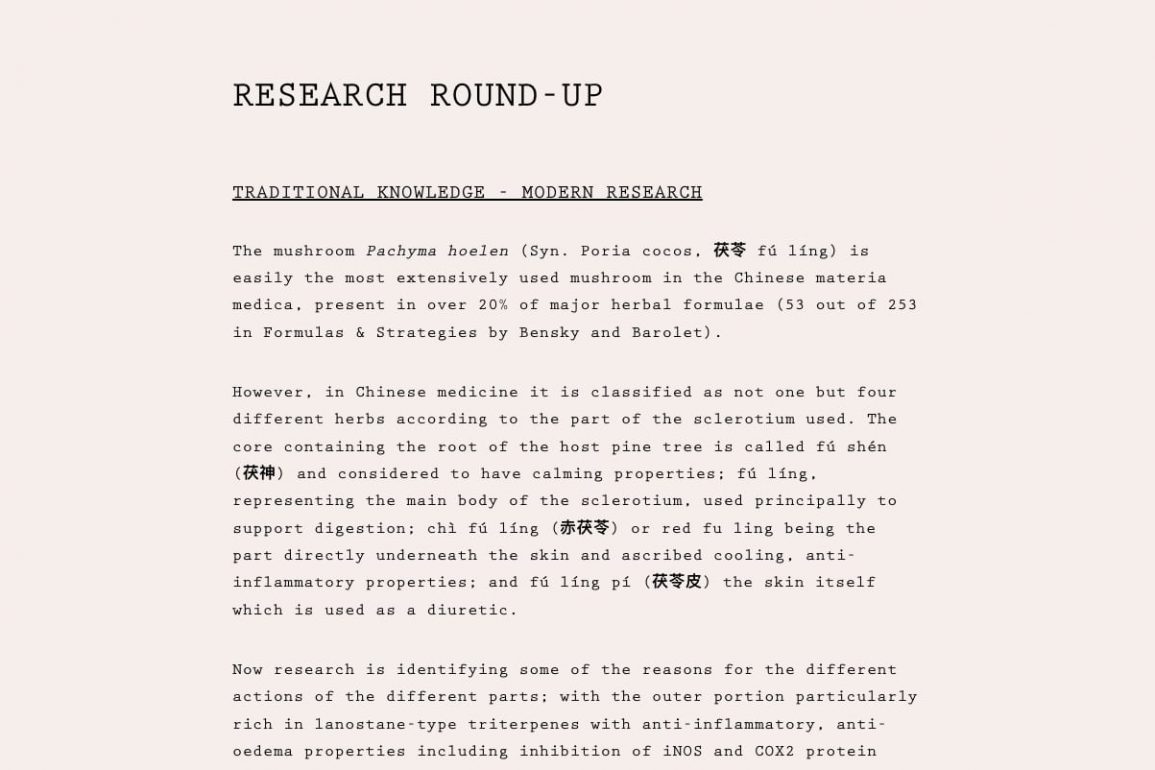 The mushroom Pachyma hoelen (Syn. Poria cocos, 茯苓 fú líng) is easily the most extensively used mushroom in the Chinese materia medica, present in over 20% of major herbal formulae (53 out of 253 in Formulas & Strategies by Bensky and Barolet).

However, in Chinese medicine it is classified as not one but four different herbs according to the part of the sclerotium used. The core containing the root of the host pine tree is called fú shén (茯神) and considered to have calming properties; fú líng, representing the main body of the sclerotium, used principally to support digestion; chì fú líng (赤茯苓) or red fu ling being the part directly underneath the skin and ascribed cooling, anti-inflammatory properties; and fú líng pí (茯苓皮) the skin itself which is used as a diuretic.

Now research is identifying some of the reasons for the different actions of the different parts; with the outer portion particularly rich in lanostane-type triterpenes with anti-inflammatory, anti-oedema properties including inhibition of iNOS and COX2 protein expression and the release of PGE2, IL-1β, IL-6, TNF-α, and reactive oxygen species (ROS) in inflammation-induced cells.

In addition to being added to baked goods such as bread or biscuits, or as a novel protein source in foods such as pasta, it appears that mushroom extracts may even have benefits to offer as an additive for cheese.

In this study β-Glucan extracted from Oyster mushrooms was added to fresh spreadable sheep’s cheese at 0.4% (w/w). After 21 days of storage the β-Glucan fortified cheese was compared to a control by a tasting panel with the panellists giving the cheese with β-glucan a higher flavour score than the control cheese.

The β-glucan enhanced cheese was also found to have a higher concentration of acetic acid (the major free fatty acid in both cheeses).

The effect of light conditions on the content of selected active ingredients in anatomical parts of the oyster mushroom (Pleurotus ostreatus L.). Zawadska A. et al. PLoS One. 2022 Jan 4;17(1):e0262279.

As well as fruiting body formation being sensitive to external factors such as light, temperature and CO2 levels (Inside the Factory, issue 3) there is growing evidence of changes in nutritional composition in response to these as well as other factors.

In Oyster Mushrooms levels of both thiamine and riboflavin were shown to decrease with lowered light intensity while content of total polyphenols was increased.

With Auricularia polytricha, levels of protein and calcium were seen to be higher in fruiting bodies harvested earlier compared to those harvested later.

In another study levels of minerals and key metabolites were compared between samples of Inonotus hispidus growing on different trees with considerable variability reported, flavonoids being enriched in samples that had grown on Zizyphus jujuba, polysaccharides, phenol metabolites, Ca, Na, Mg, Fe, and Mn being enriched on samples from Morus alba and steroids, terpenoids, and Zn in Malus pumila samples.

In the first Shiitake mushrooms were grown on substrate containing either 5 or 20% A. membranaceus waste material (the leaves and stems discarded after after removal of the roots) with results indicating transfer and increased bioavailability of Astragalus polysaccharides with therapeutic potential into the Shiitake.

In the second the A. membranaceus leaves and stems were included in substrate for growing Oyster Mushrooms at 50% of the total substrate (AMM group) and compared with a control group. Analysis showed the Oyster Mushrooms in the AMM group but not the control group to contain several of the key metabolites from A. membranaceus including Astragalaside IV and several flavonoids. Mushrooms in the AMM group also showed increased alkaloid content, fresh weight and protein content.

Analysis of data collected as part of the US National Health and Nutrition Examination Survey indicated that increased mushroom consumption was associated with a lower incidence of depression and a reduced risk of cognitive decline while mushrooms were also among the foods correlated with reduced risk of dementia in a recent Japanese population study.

Along with mushrooms such as Oyster Mushroom and Porcini, Lion’s Mane also contains ergothioneine and it appears that this may contribute to its neurological benefits with ergothioneine being implicated in brain-derived neurotrophic factor expression in cultured cortical neurons in one study. This is in addition to ergothioneine’s other antioxidant and anti-ageing properties including improved locomotor performance.

SYNERGISTIC BENEFITS OF MUSHROOMS AND CHEMOTHERAPY

While conventional advice remains to avoid all supplements during treatment for cancer, especially chemotherapy, research continues to emerge suggesting that far from interfering with the action of the drugs or altering their pharmacokinetics, mushrooms may actually contribute to an increase in their efficacy.

In the first of two recent papers Reishi extract was shown to enhance the effectiveness of carboplatin against various breast cancer cell lines in-vitro by suppressing mammosphere formation and the expression of cancer stemness proteins as well as through a delayed response to DNA damage. The same combination also showed significant tumour growth inhibition in in-vivo xenograft models.

In the second β-glucan from the common button mushroom Agaricus bisporus was shown to increase the sensitivity of triple negative breast cancer cells to doxorubicin.

As the most abundant non-degradable plastic waste, polyethylene (PE) poses a serious threat to ecosystems worldwide.

In order to assess the ability of fungi to grow on PE landfill soil was enriched with PE and after six months 95 fungi were isolated from the enriched soil, mostly belonging to the Ascomycota phylum. These were then screened under in-vitro conditions with 97% proving capable of growing with PE powder (5-10 g/ltr) as their sole carbon source.

13 strains were then chosen for further degradation trials and significant results observed for Fusarium oxysporum, Fusarium falciforme and Purpureocillum lilacinum with strong oxidation of PE and changes in PE film morphology. Considering the rising concern about plastic disposal worldwide, the ability of these fungi to colonise PE and utilise it as a carbon source is of great interest, especially as no pre-treatment or pro-oxidant stimulants were required.

In a second study increased concentration of microplastics in the soil were seen to lead to an increased abundance of Ascomycota and decrease in Basidiomycota coupled with a reduction in arbuscular mycorrhizal fungi and an increase in ectomycorrhizal fungi with potential negative implications for crop growth.

THE COMMON BUTTON MUSHROOM IS NOT SO COMMON AFTER ALL

As well as increasing the sensitivity of breast cancer cells to doxorubicin (see above) a second study showed white button mushroom (WBM) to have a protective effect against breast cancer in rats, preventing the increase in the concentration of tumour biomarkers, improving the activity of antioxidant enzymes and reducing levels of liver enzymes.

In a separate study WBM was shown to have in-vitro anti-viral activity against Hepatitis C while WBM included in the diet of pigs (six servings a week of 75 or 150g) led to an increase in levels of amino acids known to be precursors of neurotransmitters in the cortex of the pigs as well as changes in levels of other metabolites in the liver and hippocampus correlated to changes in the gut microbiome.

MUSHROOMS AND THE GUT MICROBIOME

The more research that is carried out on the impact of mushroom consumption on the gut the more extensive it is found to be.

In a further study Lentinan from Shiitake reduced liver steatosis with evidence for involvement of the gut microbiota.

Numerous studies have documented how forests recover after fire in terms of plant regeneration and animal colonisation, but little is known about the ecological roles fungi play in this process.

It now appears that they may also play a critical role in enhancing conditions for plant regeneration after forest fires especially at an early stage in recovery by increasing soil aggregation, reducing soil erosion and enhancing soil moisture soon after fire in burned forests with burned soil 30% more aggregated when Pyrophilous fungi such as Geopyxis carbonaria, Pyronema omphalodes, and Morchella sp. were present than otherwise.

It is proposed that care be given to avoiding or delaying restoration activities that disturb this natural process, especially those that contribute to soil compaction, during early post-fire recovery when these fungi are proliferating.

The potential of bacteria for remediation of micro-cracks in concrete through biomineralization is well recognised and two recent studies indicate that fungi may be able to play a similar role.

In the first Rhizopus oryzae was able to heal cracks with a maximum width of 0.6 mm (or 1.3 mm when immobilized with calcium alginate beads) through the deposition of bio-calcite.

In the second Fusarium oxysporum, a filamentous fungi strain capable of producing biomineralization was able to germinate on the surface of concrete and grew rapidly under favourable conditions to cover an area of mortar 86 times greater than the area of the original inoculum after 96 hours. This rapid growth points to potentially significantly increased healing efficiency compared to bacterial self-healing (depending on the pH healing times were 11.3%, 15.1% and 79.6% of those required with bacterial self-healing). The fungal mycelium also demonstrated hydrophobic properties reducing the water infiltration rate to 17.22% that of regular concrete surfaces and so potentially increasing concrete’s durability. 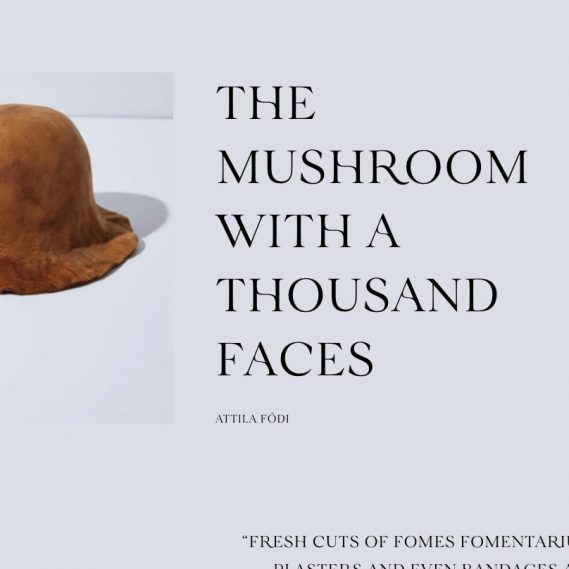 The Mushroom With a Thousand Faces
We use cookies on our website to give you the most relevant experience by remembering your preferences and repeat visits. By clicking “Accept All”, you consent to the use of ALL the cookies. However, you may visit "Cookie Settings" to provide a controlled consent.
Cookie SettingsAccept All